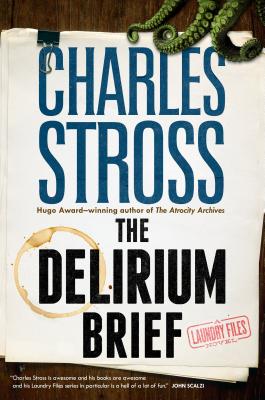 Someone is dead set to air the spy agency’s dirty laundry in The Delirium Brief, the next installment to Charles Stross’ Hugo Award-winning comedic dark fantasy Laundry Files series!

Bob Howard’s career in the Laundry, the secret British government agency dedicated to protecting the world from unspeakable horrors from beyond spacetime, has entailed high combat, brilliant hacking, ancient magic, and combat with indescribably repellent creatures of pure evil. It has also involved a wearying amount of paperwork and office politics, and his expense reports are still a mess.

Now, following the invasion of Yorkshire by the Host of Air and Darkness, the Laundry’s existence has become public, and Bob is being trotted out on TV to answer pointed questions about elven asylum seekers. What neither Bob nor his managers have foreseen is that their organization has earned the attention of a horror far more terrifying than any demon: a British government looking for public services to privatize.

Inch by inch, Bob Howard and his managers are forced to consider the truly unthinkable: a coup against the British government itself.

Laundry Files
1. The Atrocity Archives
2. The Jennifer Morgue
3. The Fuller Memorandum
4. The Apocalypse Codex
5. The Rhesus Chart
6. The Annihilation Score
7. The Nightmare Stacks


Praise For The Delirium Brief: A Laundry Files Novel…