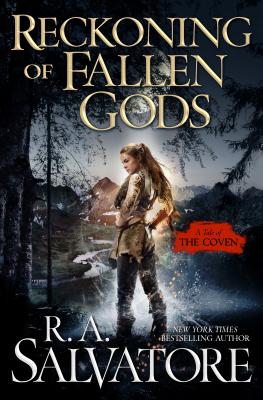 The winds of change are blowing upon Fireach Speur. Aoelyn risked her life to save the trader Talmadge and it cost her everything that is dear to her, but Talmadge survived and can’t forget the amazing woman that killed a god.

Little do they realize, war is coming to the mountain. Far to the west, a fallen empire stirs. One that sees a solar eclipse as a call to war. Their empire once dominated the known world and they want it back.


Praise For Reckoning of Fallen Gods: A Tale of the Coven…

Praise for The Ancient

"Fans of martial fantasy should enjoy his vivid depictions of combat." —Library Journal

In Praise of The Highwayman

"[A] swift-moving tale of sword and sorcery….Fans of Salvatore's unadorned approach and broad caricatures of archetypal figures should be pleased with this carnival of treachery and medieval feudalism." —Publishers Weekly

"[Salvatore] thrusts his avenger into a story pleasingly plump with action, adventure, danger, and, most admirably, great tenderness." —SF Site

Vast fun….ninja and samurai fans will get a chuckle recognizing the source of some plot elements. —Booklist

R. A. Salvatore is one of fantasy’s most popular authors, with his books frequently appearing on the New York Times bestseller list and more than 10 million copies of his books sold. He is the author of The Bear, The Dame, The Ancient, and The Highwayman as well as Gauntlgrym, The Legend of Drizzt books, including the Dark Elf Trilogy—Homeland, Exile, and Sojourn— and the Demon Wars series, among many others. Salvatore was born in Massachusetts, and earned a B.S. in communications and a B.A. in English from Fitchburg State College. He lives in Massachusetts with his wife, Diane, and their three children.
Loading...
or
Not Currently Available for Direct Purchase