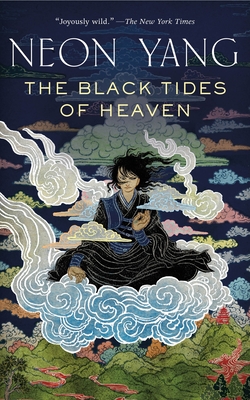 The Black Tides of Heaven (The Tensorate Series #1)

One of the 100 Best Fantasy Books of All Time, according to Time Magazine

A Finalist for the Hugo, Nebula, and World Fantasy Awards for Best Novella

The Black Tides of Heaven is one of a pair of unique, standalone introductions to Neon Yang's Tensorate Series, which Kate Elliott calls "effortlessly fascinating." For more of the story you can read its twin novella The Red Threads of Fortune, available simultaneously.

Mokoya and Akeha, the twin children of the Protector, were sold to the Grand Monastery as infants. While Mokoya developed her strange prophetic gift, Akeha was always the one who could see the strings that moved adults to action. While Mokoya received visions of what would be, Akeha realized what could be. What's more, they saw the sickness at the heart of their mother's Protectorate.

A rebellion is growing. The Machinists discover new levers to move the world every day, while the Tensors fight to put them down and preserve the power of the state. Unwilling to continue as a pawn in their mother's twisted schemes, Akeha leaves the Tensorate behind and falls in with the rebels. But every step Akeha takes towards the Machinists is a step away from Mokoya. Can Akeha find peace without shattering the bond they share with their twin?

The Tensorate Series
Book 1: The Black Tides of Heaven
Book 2: The Red Threads of Fortune
Book 3: The Descent of Monsters
Book 4: The Ascent to Godhood


Praise For The Black Tides of Heaven (The Tensorate Series #1)…

“Yang conjures up a world of magic and machines, wild monsters and sophisticated civilizations, that you'll want to return to again and again.” —Ars Technica

Neon Yang (they/them) is a queer non-binary author based in the UK. They have been nominated for the Hugo, Nebula, World Fantasy, Lambda Literary, Ignyte, and Locus Awards, and their Tensorate series of novells (The Red Threads of Fortune, The Black Tides of Heaven, The Descent of Monsters and The Ascent to Godhood) was an Otherwise Award Honoree. In previous incarnations, Neon was a molecular biologist, a science communicator, a writer for animation, games and comic studios, and a journalist for one of Singapore's major papers.
Loading...
or support indie stores by buying on