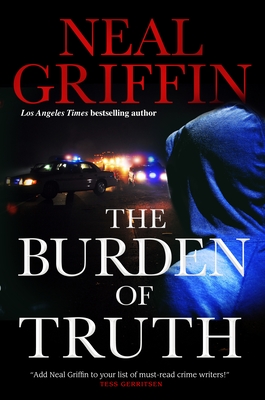 The Burden of Truth

As a serving police officer, Los Angeles Times bestselling author Neal Griffin saw how family ties, loyalty to friends, and their own ambitions could lead young men to make choices that got them hurt, killed, or imprisoned. He explores this complex web of relationships and pressures in The Burden of Truth.

In a small city in southern California, 18 year-old Omar Ortega is about to graduate high school. For years, he’s danced on the fringes of gang life, trying desperately to stay out of the cross-hairs. Once Omar joins the Army, his salary, plus his meager savings, will get his mother and siblings out of the barrio, where they’ve lived since his father was deported.

One night, everything changes. Newly released from prison, Chunks, the gang’s shot-caller, has plans for Omar. That boy, Chunks thinks, needs to be jumped in.

By dawn, Omar will be labeled a cop-killer. Law-and-order advocates and community organizers will battle over Omar’s fate in the court of public opinion while the criminal justice system grips him in its teeth.

One night can destroy a man and all who depend on him.

That he’s innocent does not matter.


Praise For The Burden of Truth…

“Griffin knows the dark and violent world he writes about. It is our good fortune he is also possessed of the keen talent to write of it so vividly.”—James Carlos Blake, author of The Ways of Wolfe

“As one of the few national columnists in America who is Latino—and the son of a retired cop—I was eager to see how cop-turned-novelist Griffin would craft Omar Ortega, a Mexican-American teenager who straddles the line between overzealous cops and bad actors in his neighborhood until his lucks runs out. Telling that story, with all its realism and necessary color—but also with the nuance, honesty and complexity it deserves—is no easy task. [Griffin is] a gifted storyteller with plenty of grit and real-life experience to back up the prose.”—Ruben Navarette

Neal Griffin (he/him) is the Los Angeles Times bestselling author of Benefit of the Doubt. The son of a philosophy professor, Griffin grew up in Eau Claire, WI, a town much like Newberg, the setting of his first novels. After a stint in the Marines, Griffin went into law enforcement, and is currently Criminal Investigations Division Commander in a small city in California. He is a graduate of the FBI's invitation-only National Academy training program and is a certified Master Instructor in law enforcement leadership and ethics. Griffin is married to Olga Diaz and has four children.
or support indie stores by buying on