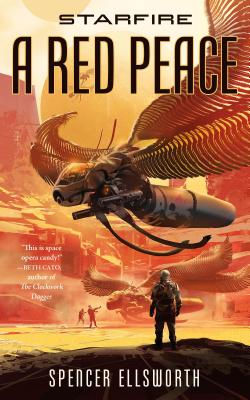 A Red Peace (The Starfire Trilogy #1)

A Red Peace, first in Spencer Ellsworth's Starfire trilogy, is an action-packed space opera in a universe where the oppressed half-Jorian crosses have risen up to supplant humanity and dominate the galaxy.

Half-breed human star navigator Jaqi, working the edges of human-settled space on contract to whoever will hire her, stumbles into possession of an artifact that the leader of the Rebellion wants desperately enough to send his personal guard after. An interstellar empire and the fate of the remnant of humanity hang in the balance.

Spencer Ellsworth has written a classic space opera, with space battles between giant bugs, sun-sized spiders, planets of cyborgs and a heroine with enough grit to bring down the galaxy's newest warlord.

SPENCER ELLSWORTH's short fiction has previously appeared in Lightspeed Magazine, The Magazine of Fantasy & Science Fiction, and Tor.com. He is the author of the Starfire trilogy, which begins with Starfire: A Red Peace. He lives in the Pacific Northwest with his wife and three children, works as a teacher/administrator at a small tribal college on a Native American reservation.

Praise For Starfire: A Red Peace (The Starfire Trilogy #1)…

“Cozy, classic space opera is twisted in innovative, awesome ways in Ellsworth's debut A Red Peace. Humankind is the nasty invasive alien in space that's about to get its comeuppance, and wow, do the pages zoom by. I impatiently await the next book!”—Beth Cato, author of The Clockwork Dagger