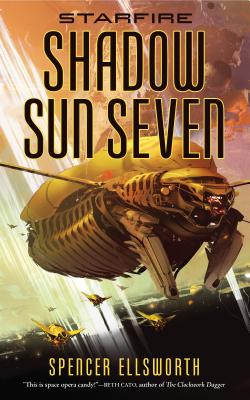 Jaqi, Araskar and Z are on the run from everyone - the Resistance, the remnants of the Empire, the cyborg Suits, and right now from the Matakas - and the Matakas are the most pressing concern because the insectoid aliens have the drop on them. The Resistance has a big reward out for Araskar and the human children he and Jaqi are protecting. But Araskar has something to offer the mercenary aliens. He knows how to get to a huge supply of pure oxygen cells, something in short supply in the formerly human Empire, and that might be enough to buy their freedom. Araskar knows where it is, and Jaqi can take them there. With the Matakas as troops, they break into Shadow Sun Seven, on the edge of the Dark Zone.

SPENCER ELLSWORTH's short fiction has previously appeared in Lightspeed Magazine, The Magazine of Fantasy & Science Fiction, and Tor.com. He is the author of the Starfire trilogy, which begins with Starfire: A Red Peace. He lives in the Pacific Northwest with his wife and three children, works as a teacher/administrator at a small tribal college on a Native American reservation.

“Cozy, classic space opera is twisted in innovative, awesome ways in Ellsworth's debut A Red Peace. Humankind is the nasty invasive alien in space that's about to get its comeuppance, and wow, do the pages zoom by. I impatiently await the next book!”—Beth Cato, author of The Clockwork Dagger