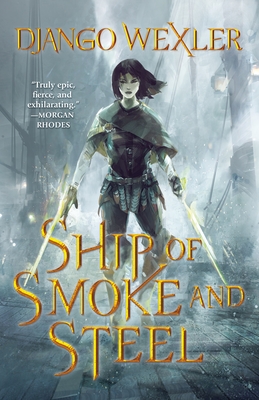 Ship of Smoke and Steel (Paperback)

Ship of Smoke and Steel is the launch of Django Wexler's cinematic, action-packed epic fantasy Wells of Sorcery trilogy.

A FIERCE WARRIOR. HER DEADLY MAGIC.
AN EPIC MISSION TO STEAL A GHOST SHIP.

In the lower wards of Kahnzoka, the great port city of the Blessed Empire, eighteen-year-old ward boss Isoka enforces the will of her criminal masters with the power of Melos, the Well of Combat. The money she collects goes to keep her little sister living in comfort, far from the bloody streets they grew up on.

When Isoka's magic is discovered by the government, she's arrested and brought to the Emperor's spymaster, who sends her on an impossible mission: steal Soliton, a legendary ghost ship—a ship from which no one has ever returned. If she fails, her sister’s life is forfeit.

On board Soliton, nothing is as simple as it seems. Isoka tries to get close to the ship's mysterious captain, but to do it she must become part of the brutal crew and join their endless battles against twisted creatures. She doesn't expect to have to contend with feelings for a charismatic fighter who shares her combat magic, or for a fearless princess who wields an even darker power.

“Truly epic, fierce, and exhilarating, Ship of Smoke and Steel will capture you and lock you away. With magical combat sequences fit for the big screen, the action is almost as breathtaking as the intrigue.” —Morgan Rhodes, New York Times bestselling author of the Falling Kingdoms series

Django Wexler is a self-proclaimed computer/fantasy/sci-fi geek. He graduated from Carnegie Mellon University with degrees in creative writing and computer science, worked in artificial intelligence research and as a programmer/writer for Microsoft, and is now a full-time fantasy writer. Django is the author of The Shadow Campaigns, an epic fantasy series for adults published by Roc (an imprint of Penguin), and The Forbidden Library, a classic fantasy series for young readers published by Kathy Dawson Books (an imprint of Penguin Young Readers Group).

“The first in a thrilling, action-packed fantasy series that epitomizes the fight for survival…. Wexler's young adult debut is a gripping, fast-paced fantasy enrapturing readers until the end…. This ever changing world of magic is beautifully constructed with tantalizing details that evoke a variety of cultural influences. The characters are well-developed, and diversity—in ethnicity, ability, and sexuality—is abundant.” —Kirkus Reviews

"Wexler, most recently known for his adult fantasy series The Shadow Campaigns and children’s adventures The Forbidden Library series, has another engrossing winner on his hands. The title, cover, and content, which is often violent and sometimes racy, will evoke comparisons to Sarah J. Maas’ Throne of Glass series."—Booklist

"Ship of Smoke and Steel is a brisk, gritty adventure starring a heroine with genuine agency and power, despite the overwhelming odds stacked against her. The world is sharp and unforgiving, the mysteries are deep, the action is harrowing and triumphant."—Scott Lynch, author of The Lies of Locke Lamora

Praise for Django Wexler's previous works:
“A standout.... There’s no time like the present to lose oneself in the military and political struggles of the Vordanai Empire.” —Fonda Lee, author of Exo, for LibraryJournal.com, on The Shadow Campaigns series

“Warning: You'll probably be hooked on Wexler's insane 'flintlock fantasy' worldbuilding.” —Charlie Jane Anders, author of All the Birds in the Sky, for io9.com, on “The Penitent Damned”

“Audacious and subversive.” —Publishers Weekly on The Shadow Throne

“Suspenseful, emotional, and extremely gratifying.” —Booklist on The Infernal Battalion

“Wexler is an exceptionally good writer, period.” —Foz Meadows, author of An Accident of Stars and Hugo Award nominee for Best Fan Writer, on The Shadow Throne

“Just as much as the delightful action scenes and the narrative drive and the fantastic approach to magic and blowing [stuff] up, Wexler’s commitment to portraying a wide variety of women matters.” —Liz Bourke, Hugo Award nominee for Best Fan Writer, for Tor.com, on The Price of Valor