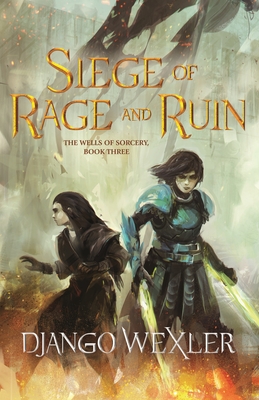 Siege of Rage and Ruin (The Wells of Sorcery Trilogy #3)

Siege of Rage and Ruin is the explosive final adventure in Django Wexler's The Wells of Sorcery trilogy, an action-packed epic fantasy saga.

Isoka has done the impossible—she’s captured the ghost ship Soliton.

With her crew of mage-bloods, including the love of her life Princess Meroe, Isoka returns to the empire that sent her on her deadly mission. She’s ready to hand over the ghost ship as ransom for her sister Tori’s life, but arrives to find her home city under siege. And Tori at the helm of a rebellion.

Neither Isoka’s mastery of combat magic, nor Tori’s proficiency with mind control, could have prepared them for the feelings their reunion surfaces. But they’re soon drawn back into the rebels’ fight to free the city that almost killed them.

“A fast-paced, compelling conclusion to this fantasy saga.” —Kirkus Reviews on Siege of Rage and Ruin

“A strong young adult fantasy series, with excellent, intriguing worldbuilding, complex, queer characters, and strong themes that echoed in my mind long after the close of each book, Wexler nails the landing not just for Siege of Rage and Ruin but for the whole of the Wells of Sorcery trilogy.” —Tor.com

“The final book in this action-packed trilogy gives readers more of what they’ve loved: magic, mayhem, and adventure, plus a neat ending.” —Booklist on Siege of Rage and Ruin

Django Wexler is a self-proclaimed computer/fantasy/sci-fi geek. He graduated from Carnegie Mellon University with degrees in creative writing and computer science, worked in artificial intelligence research and as a programmer/writer for Microsoft, and is now a full-time fantasy writer. Django is the author of The Shadow Campaigns, an epic fantasy series for adults published by Roc (an imprint of Penguin), and The Forbidden Library, a classic fantasy series for young readers published by Kathy Dawson Books (an imprint of Penguin Young Readers Group).
Loading...
or
Not Currently Available for Direct Purchase