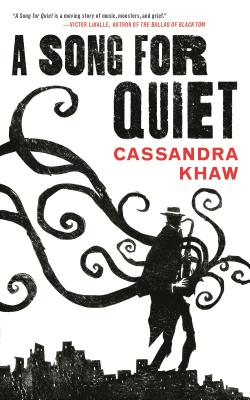 Cassandra Khaw returns with A Song for Quiet, a new standalone Persons Non Grata novella from the world of Hammers on Bone, finalist for the British Fantasy Award and the Locus Award, and which Kameron Hurley called "a long leap into the gory, the weird, and the fantastic."

Deacon James is a rambling bluesman straight from Georgia, a black man with troubles that he can't escape, and music that won't let him go. On a train to Arkham, he meets trouble — visions of nightmares, gaping mouths and grasping tendrils, and a madman who calls himself John Persons. According to the stranger, Deacon is carrying a seed in his head, a thing that will destroy the world if he lets it hatch.

The mad ravings chase Deacon to his next gig. His saxophone doesn't call up his audience from their seats, it calls up monstrosities from across dimensions. As Deacon flees, chased by horrors and cultists, he stumbles upon a runaway girl, who is trying to escape the destiny awaiting her. Like Deacon, she carries something deep inside her, something twisted and dangerous. Together, they seek to leave Arkham, only to find the Thousand Young lurking in the woods.

The song in Deacon’s head is growing stronger, and soon he won’t be able to ignore it any more.


Praise For A Song for Quiet (Persons Non Grata #2)…

A Song for Quiet is a moving story of music, monsters and grief." —Victor LaValle, author of The Ballad of Black Tom

"Khaw continues to demonstrate mastery of seductive short-form horror, juxtaposing the disgusting and relentlessly terrifying with moments of exquisite beauty in ways that make it impossible to look away." —Publishers Weekly, starred review

“Gritty, unflinching, and unexpected, A Song for Silence has an infectious Blues rhythm that's impossible to ignore.” —Angela Slatter, World Fantasy Award-winning author of The Bitterwood Bible and Other Recountings


PRAISE FOR HAMMERS ON BONE

"A glorious fusion of the classic noir detective thriller with Lovecraftian horror. Possibly the most promising horror debut of 2016, a suitable light in these dark times." —Charles Stross, author of the Laundry Files

"Cassandra Khaw's explosive, evocative prose is a treat to read. Khaw's ability to transform the mundane into the deeply phantasmagorical is nothing short of magical. Prepare to take a long leap into the gory, the weird, and the fantastic in the hands of a fresh new voice in fiction." —Kameron Hurley, Hugo Award-winning author of Mirror Empire and The Geek Feminist Revolution

"The drearily everyday is infused with Lovecraftian dread in a marvelously horrifying, tightly built novella that spins a satisfying tale while doing honor to both of its core sources." —Publishers Weekly, starred review

"Khaw paints a bleak yet potent alternate reality in which monsters—friend or foe—are devastatingly real. Persons strikes a perfect antihero stance that is emotionally fragile despite his supernatural power. Hammers on Bone is a brilliant blend of two venerable genres as well as a deeply affecting tale on its own." —Shelf Awareness, starred review

"Khaw has a definite flair for the grotesque." —RT Book Reviews

"Hammers on Bone is a delectable surprise, a discomfiting nightmare in novella shape, its eyes looking back at you to ask: who are the real monsters, little reader?" —Book Smugglers

“Atmospheric Lovecraftian noir with a really tremendous eye for detail… If you like Dashiel Hammett and Lovecraft, this is a very effective blend.” —Aliette de Bodard, Nebula Award-winning author of The House of Shattered Wings

"This is jolly good. You really ought to read this." —Jonathan L. Howard, author of the Johannes Cabal and Carter & Lovecraft series

"So hardboiled you could crack demon heads with it, this twisting and turning Lovecraftian PI mystery is a delight. Cassandra Khaw — fast becoming one of the hottest names in fantasy fiction — has a light, assured touch and an inimitable style. I’ll read anything they write." —Lavie Tidhar, World Fantasy Award-winning author of A Man Lies Dreaming and The Violent Century

"Cassandra Khaw blows the dust off Lovecraft's prose to resurrect the Elder Gods in a white-hot, eyeball-popping adventure." —Ferrett Steinmetz, author of Flex

"Khaw is one of the most exciting writers I've seen emerge in the past two years. [Hammers on Bone] is Lovecraftian in all the best ways." —Silvia Moreno-Garcia, author of Certain Dark Things

CASSANDRA KHAW is an award-winning game writer, and former scriptwriter at Ubisoft Montreal. Khaw's work can be found in places like Fantasy & Science Fiction, Lightspeed, and Tor.com. Khaw's first original novella, Hammers on Bone, was a British Fantasy award and Locus award finalist, and their novella, Nothing But Blackened Teeth, is published by Nightfire.
Loading...
or support indie stores by buying on