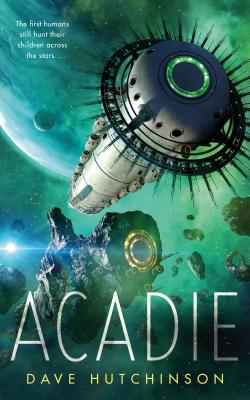 The first humans still hunt their children across the stars. Dave Hutchinson brings far future science fiction on a grand scale in Acadie.

The Colony left Earth to find their utopia--a home on a new planet where their leader could fully explore the colonists’ genetic potential, unfettered by their homeworld's restrictions. They settled a new paradise, and have been evolving and adapting for centuries.

Earth has other plans.

The original humans have been tracking their descendants across the stars, bent on their annihilation. They won't stop until the new humans have been destroyed, their experimentation wiped out of the human gene pool.

Can't anyone let go of a grudge anymore?

"An insouciant love letter to SF itself." —Locus

DAVE HUTCHINSON was born in Sheffield in 1960 and read American Studies at the University of Nottingham before becoming a journalist. He’s the author of five collections of short stories and four novels. His novella The Push was nominated for the BSFA Award in 2010, and his novels Europe in Autumn and Europe at Midnight were nominated for the BSFA, Arthur C Clarke, and John W Campbell Memorial Awards in 2015 and 2016 respectively. Europe at Midnight was also shortlisted for a Kitschie Award in 2016. He now writes full-time, and lives in North London.
Loading...
or support indie stores by buying on