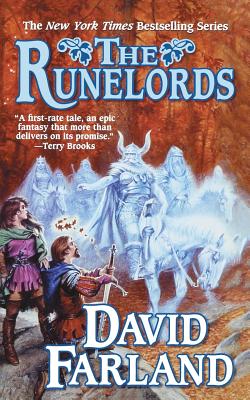 The first book of the saga of The Runelords

Young Prince Gaborn Val Orden of Mystarria is traveling in disguise on a journey to ask for the hand of the lovely Princess Iome of Sylvarresta. Armed with his gifts of strength and perception, Prince Gaborn and his warrior bodyguard stop in a local tavern along the way. Immediately, they spot a pair of assassins who have their sights set on Princess Iome's father. As the prince and his bodyguard race to warn the king of this impending danger, they realize that more than the royal family is at risk, the very fate of the Earth is in jeopardy.


Praise For The Runelords…

“A first-rate tale, an epic fantasy that more than delivers on its promise.” —Terry Brooks

“With The Runelords, David Farland breaks new ground in fantasy fiction and wakes up anyone who thought they'd read everything the genre had to offer.” —Kevin J. Anderson

“The characters are real, the action fast, and the sum a brilliant and engrossing novel.” —David Drake, author of The Lord of the Isles

David Farland (1957-2022) was the New York Times bestselling author of the Runelords fantasy series including Chaosbound, The Wyrmling Horde and Worldbinder. His other works include the Whitney Award-winning historical novel In the Company of Angels, and the young adult novel Nightingale, which won the International Book Award, the Grand Prize at the Hollywood Book Festival, and the Southern California Book Festival.

Winning first place in the 1987 Writers of the Future contest for the novella On My Way to Paradise, Farland became one of the contest’s judges in 1991. He also co-edited volume eight of the contest’s annual anthology series, subsequently editing volumes nine through fourteen, and later volumes twenty-nine through thirty-seven. As Dave Wolverton, he wrote many science fiction novels including Star Wars: The Courtship of Princess Leia, and was a finalist for the Nebula and Philip K. Dick awards.