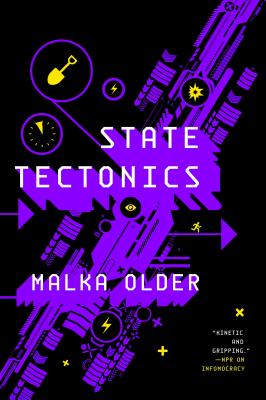 One of the best books of 2018, according to Kirkus Reviews, the Chicago Review of Books, and BookRiot.

Campbell Award finalist Malka Older's State Tectonics concludes The Centenal Cycle, the cyberpunk poltical thriller series that began with Infomocracy and is a finalist for the Hugo Award for Best Series.

The future of democracy must evolve or die.

The last time Information held an election, a global network outage, two counts of sabotage by major world governments, and a devastating earthquake almost shook micro-democracy apart. Five years later, it's time to vote again, and the system that has ensured global peace for 25 years is more vulnerable than ever.

Unknown enemies are attacking Information's network infrastructure. Spies, former superpowers, and revolutionaries sharpen their knives in the shadows. And Information's best agents question whether the data monopoly they've served all their lives is worth saving, or whether it's time to burn the world down and start anew.

“State Tectonics is a really good story about our near future and how social and news media are increasingly shaping the perceived realities of people and countries. It shows how people of good will can invent the future of democracy, and how that future might further evolve. The entire Centenal Cycle offers a vision which already influences the path of democracy and commerce in the here and now.” —Craig Newmark, founder of CraigsList

“As a work of speculative fiction — particularly about a subject as complex as the future of democracy — State Tectonics is superlative.” —TechCrunch

“Satisfying as a novel, anxiety-inducing as a comment on our society.” —Kirkus Starred Review on State Tectonics

“Subtly radical (except where it’s openly radical), this book and series continues to offer a kinetically involving narrative that can also make you think about our actual world today.” —RT Book Reviews on Null States, Top Pick (4.5 Stars)

“Kinetic and gripping, the plot hurtles toward an electoral climax that leaps off the page.” —NPR

“This brilliant book is unquestionably one of the greatest literary debuts in recent history.” —The Huffington Post

“A futuristic world with eerie parallels to current events... [an] uncanny political thriller.” —The Washington Post

“Far too messy to be utopian or dystopian, Older here raises all sorts of critical questions. I love this book; can’t wait to see what else she writes.” —Ian Bremmer, author of The End of the Free Market and Superpower

“Smart, ambitious, bursting with provocative extrapolations, Infomocracy is the big-data-big-ideas-techno-analytical-microdemoglobal-post-everything political thriller we've been waiting for.” —Ken Liu, author of The Grace of Kings

“A frighteningly relevant exploration of how the flow of information can manipulate public opinion...timely and perhaps timeless.” —Kirkus Reviews starred review

“Older’s sparkling debut, the first full-length novel from the novella-focused Tor.com imprint, serves as both a callback to classic futurist adventure tales by the likes of Brunner and Bester and a current examination of the power of information.” —Publishers Weekly

“In the mid-21st century, your biggest threat isn’t Artificial Intelligence—it’s other people. Yet the passionate, partisan, political and ultimately fallible men and women fighting for their beliefs are also Infomocracy’s greatest hope. An inspiring book about what we frail humans could still achieve, if we learn to work together.” —Karl Schroeder, author of Lockstep and the Virga saga