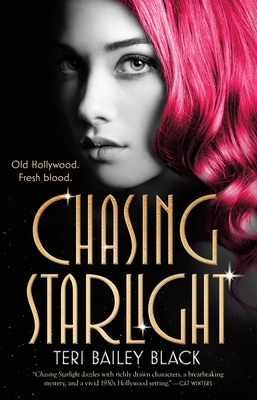 Movies, mansions, and murder in the Golden Age of Hollywood! Teri Bailey Black's Chasing Starlight is a historical mystery from the author of Girl at the Grave, winner of the Thriller Award for Best Young Adult Novel.

1938. The Golden Age of Hollywood. Palm trees and movie stars. Film studios pumping out musicals and gangster films at a furious pace. Everyone wants to be a star—except society girl and aspiring astronomer Kate Hildebrand. She’s already famous after a childhood tragedy turned her into a newspaper headline. What she craves now is stability.

But when Kate has to move to Hollywood to live with her washed-up silent film star grandfather, she walks into a murder scene and finds herself on the front page again. She suspects one of the young men boarding in her grandfather’s run-down mansion is the killer—or maybe even her grandfather.

Now, Kate must discover the killer while working on the set of a musical—and falling in love. Will her stars align so she can catch the murderer and live the dream in Old Hollywood? Or will she find that she’s just chasing starlight?

“A thrillingly romantic dive into Old Hollywood that will appeal to cinema and history buffs alike.” —Booklist

“A fast-paced crime story that nods knowingly at cinematic tropes even as it employs them, and it tugs at the heartstrings just the same.” —BookPage

“Hand this to readers who love mystery, romance, and the golden age of Hollywood filmmaking.” —School Library Connection (recommended)

TERI BAILEY BLACK may write about troubled people in dark places, but she grew up in a large, happy family, surrounded by books, art, and California sunshine. She's happiest when she's creating things, whether it's with words, fabric, or chocolate. Her debut, Girl at the Grave (Tor Teen), won the Thriller Award for Best Young Adult Novel. She and her husband have four children and live in Orange County, California.
Loading...
or support indie stores by buying on