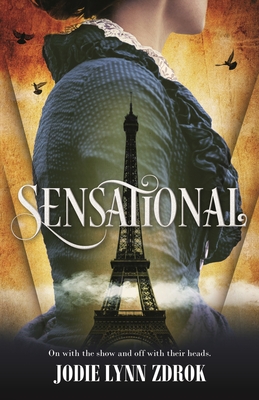 In Jodie Lynn Zdrok's Sensational, eighteen-year-old Nathalie Baudin, ever-curious reporter at the Paris morgue, is no stranger to death—even discounting the supernatural visions that give her disturbing glimpses into the minds of killers.

When the Exposition Universelle opens in Paris, Nathalie welcomes a much-needed break from the heartache of her friend's murder. The fair is full of sensational innovations, cultural displays, and marvelous inventions from around the world.

But someone is celebrating the 100th anniversary of the guillotine with a gruesome display of their own: beheaded victims in some of the Exposition’s most popular exhibits.

Haunted by the past and burdened with new secrets, Nathalie struggles to use her wits and her gift. Yet she and her friends must stop the killer before the macabre display features one of them...

“Readers will enjoy exploring fin de siècle Paris with Nathalie and her spirited friends while they attempt to suss out a vicious killer. An entertaining duology closer.”—Kirkus Reviews on Sensational

“Clever and full of murder, Jodie Lynn Zdrok's Spectacle had my eyes glued to the pages as the body count rose, and mystery stacked upon mystery as our heroine closed in on a killer who seemed miles ahead of the Parisian authorities. Fans of serial killers and criminal investigations will find much to love, and fascinating passages about morgue tours will appeal to the morbid rubbernecker in us all.”—Kendare Blake, #1 New York Times bestselling author of the Three Dark Crowns series

“With a fierce heroine, grisly 19th-century murders, and a mystery that left me on the edge of my seat, Spectacle is an immersive, Parisian, YA From Hell that I absolutely devoured!”—Gretchen McNeil, author of Ten and #MurderTrending

“Zdrok explores the universal fascination with death, set among the darker corners of 1887 Paris, and the very idea of the morgue viewings (to which parents brought their children) is chilling...Grisly, plot driven—and very creepy. Fans of historical thrillers that invoke the enduring spirit of Jack the Ripper will have fun.”—Kirkus Reviews

“Hints of the murderer’s identity are subtly and intriguingly folded into the story, and unresolved plot threads pave the way for future cases, during which Nathalie can discover more about her powers. The blend of history, mystery, and fantasy makes this debut novel a good pick for fans of Libba Bray’s Diviners series or William Ritter’s Jackaby books.”—Booklist