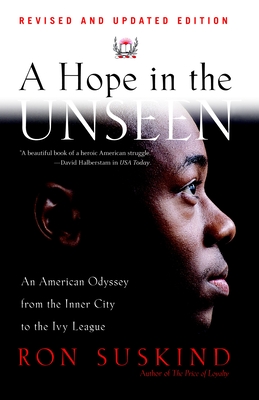 A Hope in the Unseen

An American Odyssey from the Inner City to the Ivy League

The inspiring, true coming-of-age story of a ferociously determined young man who, armed only with his intellect and his willpower, fights his way out of despair.

In 1993, Cedric Jennings was a bright and ferociously determined honor student at Ballou, a high school in one of Washington D.C.’s most dangerous neighborhoods, where the dropout rate was well into double digits and just 80 students out of more than 1,350 boasted an average of B or better. At Ballou, Cedric had almost no friends. He ate lunch in a classroom most days, plowing through the extra work he asked for, knowing that he was really competing with kids from other, harder schools. Cedric Jennings’s driving ambition—which was fully supported by his forceful mother—was to attend a top college.

In September 1995, after years of near superhuman dedication, he realized that ambition when he began as a freshman at Brown University. But he didn't leave his struggles behind. He found himself unprepared for college: he struggled to master classwork and fit in with the white upper-class students. Having traveled too far to turn back, Cedric was left to rely on his intelligence and his determination to maintain hope in the unseen—a future of acceptance and reward.

In this updated edition, A Hope in the Unseen chronicles Cedric’s odyssey during his last two years of high school, follows him through his difficult first year at Brown, and tells the story of his subsequent successes in college and the world of work. Eye-opening, sometimes humorous, and often deeply moving, A Hope in the Unseen weaves a crucial new thread into the rich and ongoing narrative of the American experience.

Praise For A Hope in the Unseen: An American Odyssey from the Inner City to the Ivy League…

"A beautiful book of a heroic American struggle."
--David Halberstam in USA Today

"A story of sheer human grit that should be read by others as example and inspiration."
--Jonathan Yardley, Washington Post Book World

"Absolutely gripping.  A sort of suspense novel of the human psyche. . . . It's beyond good, it's really extraordinary."
--Walter Kirn, National Public Radio

Ron Suskind is the author of The Globe and Mail and New York Times bestsellers The One Percent Doctrine, The Price of Loyalty, and A Hope in the Unseen. From 1993 to 2000 he was the senior national affairs writer for The Wall Street Journal, where he won a Pulitzer Prize for Feature Writing. He currently writes for various national magazines, including The New York Times Magazine and Esquire, and is the senior fellow at Harvard’s Center of Ethics. He lives in Harvard Square, MA.