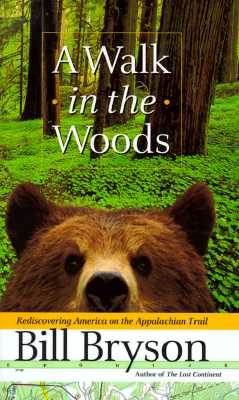 Stretching from Georgia to Maine, the Appalachian Trail offers some of America's most breathtaking scenery. After living for many years in England, Bill Bryson moved back to the United States and decided to reacquaint himself with his country by taking to this uninterrupted "hiker's highway." Before long, Bryson and his infamous walking companion, Stephen Katz, are stocking up on insulated long johns, noodles and manuals for avoiding bear attacks as they prepare to set off on a walk that is both amusingly ill-conceived and surprisingly adventurous. John Muir, Henry David Thoreau, and Peter Jenkins never took a hike like this.
"A Walk in the Woods" showcases Bryson at the height of his comic powers. Meeting up with characters such as Beulah and her fearsome husband, "Bubba T. Flubba," readers risk snakebite and hantavirus to trudge through swollen rivers, traipse up mountainsteps, and develop a new reverence for cream sodas and hot showers. But Bryson also uses his acute powers of observation to conjure a poignant backdrop of silent forests and sparkling lakes, thereby making a gentle but unforgettable plea for the ecological treasures we are in danger of losing. Fresh, illuminating, and uproariously funny, "A Walk in the Woods" is travel writing at its very best.