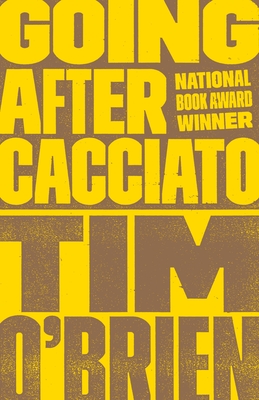 So wrote The New York Times of Tim O'Brien's now classic novel of Vietnam. Winner of the 1979 National Book Award, Going After Cacciato captures the peculiar mixture of horror and hallucination that marked this strangest of wars.

In a blend of reality and fantasy, this novel tells the story of a young soldier who one day lays down his rifle and sets off on a quixotic journey from the jungles of Indochina to the streets of Paris. In its memorable evocation of men both fleeing from and meeting the demands of battle, Going After Cacciato stands as much more than just a great war novel. Ultimately it's about the forces of fear and heroism that do battle in the hearts of us all.

Praise For Going After Cacciato: A Novel…

"Simply put, the best novel written about the war. I do not know . . . any writer, journalist, or novelist who does not concede that position to O'Brien's Going After Cacciato."
—Miami Herald

"A novel of great beauty and importance."
—Boston Globe

"As a fictional portrait of this war, Going After Cacciato is hard to fault, and will be hard to better."
—John Updike, The New Yorker

Tim O’Brien received the 1979 National Book Award in fiction for Going After Cacciato. His other works include the Pulitzer finalist and a New York Times Book of the Century, The Things They Carried; the acclaimed novels Tomcat in Love and Northern Lights; and the national bestselling memoir If I Die in a Combat Zone. His novel In the Lake of the Woods received the James Fenimore Cooper Prize from the Society of American Historians and was named the best novel of 1994 by Time. In 2010 he received the Katherine Anne Porter Award for a distinguished lifetime body of work and in 2012 he received the Richard C. Holbrooke Distinguished Achievement Award from the Dayton Literary Peace Prize Foundation. He was awarded the Pritzker Literature Award for Lifetime Achievement in Military Writing in 2013.