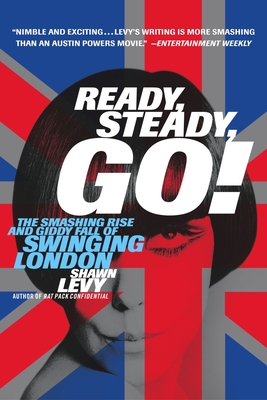 The Smashing Rise and Giddy Fall of Swinging London

It’s the summer of 1966... The fundamental old ways: chastity, rationality, harmony, sobriety, even democracy: blasted to nothing or crumbling under siege. The city glows. It echoes. It pulses. It bleeds pastel and fuzzy, spicy, paisley and soft. This is how it's always going to be: smashing clothes, brilliant music, easy sex, eternal youth, the eyes of everybody, everyone's first thought, the top of the world, right here, right now: Swinging London.

Shawn Levy has a genius for unearthing the secret history of popular culture. The Los Angeles Times called King of Comedy, his biography of Jerry Lewis, "a model of what a celebrity bio ought to be–smart, knowing, insightful, often funny, full of fascinating insiders' stories," and the Boston Globe declared that Rat Pack Confidential "evokes the time in question with the power of a novel, as well as James Ellroy's American Tabloid and better by far than Don DeLillo's Underworld."

In Ready, Steady, Go! Levy captures the spirit of the sixties in all its exuberance. A portrait of London from roughly 1961 to 1969, it chronicles the explosion of creativity–in art, music and fashion–and the revolutions–sexual, social and political–that reshaped the world. Levy deftly blends the enthusiasm of a fan, the discerning eye of a social critic and a historian's objectivity as he re-creates the hectic pace and daring experimentation of the times–from the utter transformation of rock 'n' roll by the Beatles and the Rolling Stones to the new aesthetics introduced by fashion designers like Mary Quant, haircutters like Vidal Sassoon, photographers like David Bailey, actors like Michael Caine and Terence Stamp and filmmakers like Richard Lester and Nicolas Roeg to the wild clothing shops and cutting-edge clubs that made Carnaby Street and King's Road the hippest thoroughfares in the world.

Spiced with the reminiscences of some of the leading icons of that period, their fans and followers, and featuring a photographic gallery of well-known faces and far-out fashions, Ready, Steady, Go! is an irresistible re-creation of a time and place that seemed almost impossibly fun.

SHAWN LEVY is the author of six previous books, including the New York Timesbestsellers Rat Pack Confidential and Paul Newman: A Life.  He served as film critic of The Oregonian from 1997 to 2012 and is a former senior editor ofAmerican Film and a former associate editor of Box Office. His work has appeared in the New York Times, the Los Angeles Times, the San Francisco Chronicle, The Guardian, The Independent, Film Comment, Movieline, and Sight and Sound, among many other publications. He lives in Portland, Oregon.
Loading...
or support indie stores by buying on