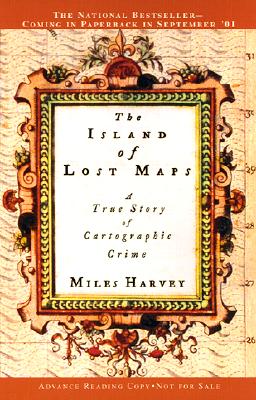 The Island of Lost Maps (Paperback)

A True Story of Cartographic Crime

The Island of Lost Maps tells the story of a curious crime spree: the theft of scores of valuable centuries-old maps from some of the most prominent research libraries in the United States and Canada. The perpetrator was Gilbert Joseph Bland, Jr., an enigmatic antiques dealer from South Florida, whose cross-country slash-and-dash operation had gone virtually undetected until he was caught in 1995–and was unmasked as the most prolific American map thief in history. As Miles Harvey unravels the mystery of Bland’s life, he maps out the world of cartography and cartographic crime, weaving together a fascinating story of exploration, craftsmanship, villainy, and the lure of the unknown.

Miles Harvey began reporting on Gilbert Bland in 1996 for Outside magazine. He has worked for UPI and In These Times, and he was the book-review columnist for Outside. A graduate of the University of Illinois at Champaign-Urbana and the University of Michigan, he has had a lifelong fascination with maps. He can be reached via the Internet at www.milesharvey.com. "From the Hardcover edition."

Praise For The Island of Lost Maps: A True Story of Cartographic Crime…


"Beguiling…as with the best of maps, the more one looks, the more fascinating and intriguing it all becomes."
--Simon Winchester, author of the Professor and the Madman