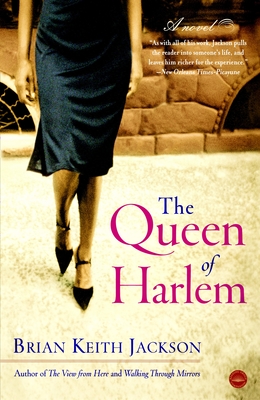 The Queen of Harlem (Paperback)

An African American Breakfast at Tiffany’s–a hip, refreshingly candid tale of identity and self—discovery from the critically acclaimed author of The View from Here and Walking Through Mirrors.

Mason Randolph, a black preppie of impeccable Southern pedigree, is bound for Stanford Law School after graduating from college. Before embarking on the path to his golden future, however, he takes a detour through Harlem, where he intends to live "authentically" with "real black people."

Mason takes the name "Malik" and moves into the orbit of the ever—fabulous Carmen, uptown diva and doyenne of Harlem. Carmen, always ready to have a handsome young man at her fabulous soirees and to add to her devoted entourage, happily takes him under her wing. Fueled by his parents' money and dodging the people who remember him as Mason Randolph, "Malik" masquerades as a "ghettonian," exploring the wonders and pleasures of a Harlem in the midst of a second Renaissance. But his odyssey takes a different turn when he meets Kyra, whose world mirrors the one he has abandoned. As he contemplates the choices Kyra has made, and begins to reexamine his own presumptions about identity and authenticity, Mason realizes that everyone has something to hide and that to get what we want, we have to be willing to let go of our secrets.

People compared Brian Keith Jackson's remarkable first novel, The View from Here, to the works of Alice Walker and Toni Morrison, and Publishers Weekly called it "an extraordinary debut...[by] a formidable craftsman and exceptionally gifted storyteller." A novel rich in humor and insight, The Queen of Harlem will earn Jackson a much—deserved place in the center of today’s literary landscape.

BRIAN KEITH JACKSON has received fellowships from Art Matters, the Jerome Foundation, and the Millay Colony for the Arts. The View from Here won the American Library Association Literary Award for First Fiction from the Black Caucus of America. Jackson lives in Harlem.

Praise For The Queen of Harlem: A Novel…

"Once again Jackson displays his keen ability to depart from the predictable and to draw the kind of fascinating, original characters you'd love to invite to your next party."
–A' Lelia Bundles, author of On Her Own: The Life and Times of Madame C. J. Walker

"An intriguing and well-written look at the nature of identity, whatever the color."
-Kirkus Reviews
or
Buy Here
Copyright © 2020 American Booksellers Association