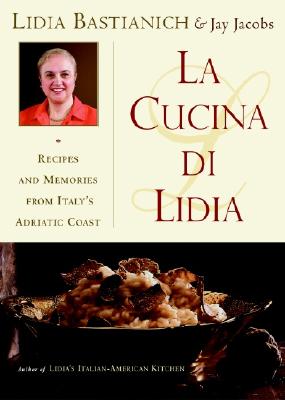 Lidia Bastianich is famous for her Italian-American cooking, but this cookbook–her first–captures the distinctive cuisine of her native Istria, located on Italy’s northeastern Adriatic coast near the border of the former Yugoslavia. This book is also her most personal; in addition to the recipes, she has included numerous personal stories, memories, and photographs from her childhood.

With La Cucina di Lidia, you can savor antipasti such as Polenta with Fontina and Mushrooms or Shrimp and Mixed Bean Salad. Rice and pastas include Plum Gnocchi, Risotto with Squash Blossoms, and Zucchini and Tagliatelle with Leek Sauce. Entrées feature fish (Swordfish in Sweet and Sour Sauce), fowl (Roast Chicken with Rosemary and Orange), meat (Stuffed Breast of Veal), and game (Duck Roasted with Sauerkraut). Desserts range from Chocolate Zabaglione Cake to Apple-Custard Tart.

Here is an Italian cuisine infused with the flavors of Eastern Europe, the early repertoire of one of America’s favorite chefs. Discover Lidia’s history and memories as well as the dishes from her homeland. The stories and tastes are unforgettable.

"America’s most passionate and talented Italian cook has produced a masterful book–bursting with personal and supremely useful recipes. Here is the essence of Istrian culture distilled into a unique volume. Lidia, you are wonderful. Mille grazie!"
-Anthony Dias Blue