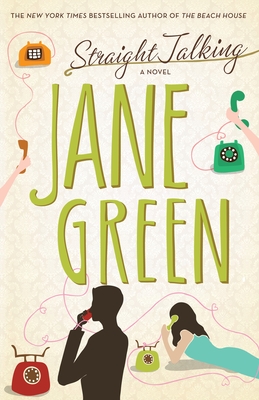 Meet Tasha—single and still searching. A producer for Britain’s most popular morning show working under a nightmare boss, Tash is well-versed in the trials and tribulations of twenty-first century dating. She and her three best friends certainly haven’t lived the fairy tale they thought they would: there’s Andy, who’s hooked on passion, but too much of a tomboy to have moved much beyond the beer-drinking contest stage; Mel, stuck in a steady but loveless relationship; and Emma, endlessly waiting for her other half to propose. Their love lives are only complicated by the sort of men who seem to drift in and out: Andrew—suave, good-looking and head over heels in love . . . with himself; Simon, who is allergic to commitment but has a bad-boy nature that’s impossible to resist; and Adam—perfectly attractive, but too sweet to be sexy.

The bestselling first novel that launched Jane Green, one of the brightest stars in contemporary women’s fiction, Straight Talking sets the record straight regarding the real world of dating, and follows the adventures of Tash and her friends as they search for fulfillment and the right kind of love. Funny, flirty, and ultimately tender, Straight Talking gets at the heart of modern romance.

Praise For Straight Talking: A Novel…

“Any woman who’s suffered a relationship trauma, or simply lost her way in the
confusion of modern life, will die for this book . . . Wickedly funny, it may not improve your love life, but it will make you squeal with laughter.” —Cosmopolitan

“Irritatingly accurate, Straight Talking is a hilarious and poignant look at love and sex.” —Elle

“Sharp, funny, and packed with familiar situations for all those who’ve ever embarked on the dating game.” —Tattler

JANE GREEN's previous books include Babyville, Bookends, Mr. Maybe, and Jemima J, all of which were international bestsellers. Before the overnight success of Straight Talking, she worked as a journalist and publicist. A native of England, she now lives outside of New York City with her husband and four children.
or support indie stores by buying on
(This book is on backorder)