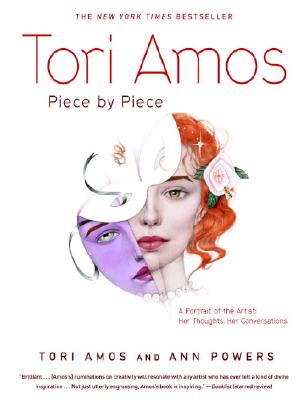 From her critically acclaimed 1992 debut, Little Earthquakes, to the recent hit, Scarlet’s Walk, Tori Amos has been a formidable force in contemporary music, with one of the most dedicated fan bases in the industry. In Tori Amos: Piece by Piece, the singer herself takes readers beyond the mere facts, explaining the specifics of her creative process—how her songs go from ideas and melodies to recordings and passionately performed concert pieces.

Written with acclaimed music journalist Ann Powers, Tori Amos: Piece by Piece is a firsthand account of the most intricate and intimate details of Amos’s life as both a private individual and a very public performing musician. In passionate and informative prose, Amos explains how her songs come to her and how she records and then performs them for audiences everywhere, all the while connecting with listeners across the world and maintaining her own family life (which includes raising a young daughter). But it is also much more, a verbal collage made by two strong female voices – and the voices of those closest to Amos—that calls upon genealogy, myth, and folklore to express Amos’s unique and fascinating personal history. In short, we see the pieces that make up – as Amos herself puts it—“the woman we call Tori.”

With photos taken especially for this book by the photographer Loren Haynes, Tori Amos: Piece by Piece is a rare treat for both Tori listeners and newcomers alike, a look into the heart and mind of an extraordinary musician.

“Amos comes across as thoughtful, likable, and witty . . . With undoubted appeal to Amos’s legion of fans, [Piece by Piece] could offer additional interest to artists of all stripes, who may find reflections of their own experiences in hers.” —Publishers Weekly

“No mere star memoir . . . it’s more like a soul-map of Amos’s stride from pop tart to poet provocateur.” —Blender

Tori Amos is foremost among the artists who have redefined the role of women in music in the last decade. Her piano-based music revived that instrument in rock and roll, and her complex yet accessible songs have pushed the parameters of songwriting. Since the double-platinum success of her solo debut, "Little Earthquakes," in 1992, Amos's albums and tours have reached millions of listeners worldwide. She is the co-founder of the Rape, Abuse, and Incest National Network (RAINN). Her latest recording is "The Beekeeper."Ann Powers has been writing about popular music and society since the early 1980s. She is the author of "Weird Like Us: My Bohemian America "and co-editor of "Rock She Wrote: Women Write About Rock, Pop, and Rap." She was a pop critic for the "New York Times" from 1997 until 2001 and an editor for the "Village Voice "from 1993 until 1996. She has written for most music publications and her work has been widely anthologized. She is currently a curator at the Experience Music Project, an interactive music museum in Seattle, Washington.
Loading...
or
Not Currently Available for Direct Purchase