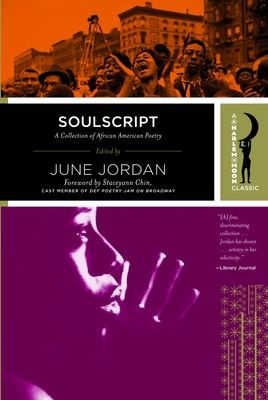 Black poets from the early twentieth century and onward come together for a moving anthology, edited and organized by the late, revered poet June Jordan.

First published in 1970, soulscript is a poignant, panoramic collection of poetry from some of the most eloquent voices in the art. Selected for their literary excellence and by the dictates of Jordan’s heart, these works tell the story of both collective and personal experiences, in Jordan’s words, “in tears, in rage, in hope, in sonnet, in blank/free verse, in overwhelming rhetorical scream.”
Soulscript features works by Jordan and other luminaries like Gwendolyn Brooks, Countee Cullen, Paul Laurence Dunbar, Nikki Giovanni, Langston Hughes, Gayl Jines, James Weldon Johnson, Audre Lorde, Claude McKay, Ishmael Reed, Sonia Sanchez, and Richard Wright, as well as the fresh voices of a turbulent era’s younger writers. Celebrated spoken-word poet Staceyann Chin, an original cast member of Def Poetry Jam on Broadway, has also added an introduction that speaks to Jordan’s legacy, helping to further cement soulscript as a visionary compilation that has already become a modern classic.

“In political journalism that cuts like razors, in essays that blast the darkness of confusion with relentless light; in poetry that looks as closely into lilac buds as into death’s mouth . . . she has comforted, explained, described, wrestled with, taught and made us laugh out loud before we wept . . . I am talking about a span of forty years of tireless activism coupled with and fueled by flawless art.”
—Toni Morrison, on June Jordan

JUNE JORDAN was an internationally recognized and beloved writer, teacher, and activist. The author of many books of poetry and essays, including Kissing God Goodbye, Haruko/Love Poems, Some of Us Did Not Die, and Affirmative Acts, she died from breast cancer in 2002.