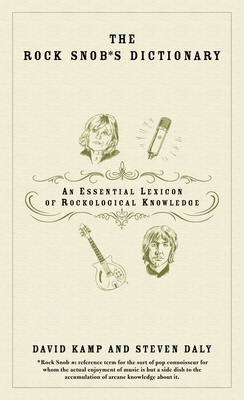 An Essential Lexicon of Rockological Knowledge

At last! An A-to-Z reference guide for readers who want to learn the cryptic language of Rock Snobs, those arcana-obsessed people who speak of "Rickenbacker guitars" and "Gram Parsons."

We've all been there--trapped in a conversation with smarty-pants music fiends who natter on about "the MC5" or "Eno" or "the Hammond B3," not wanting to let on that we haven't the slightest idea what they're talking about. Well, fret no more! The Rock Snob's Dictionary is here to define every single sacred totem of rock fandom's know-it-all fraternity, from Alt.country to Zimmy. (That's what Rock Snobs call Bob Dylan, by the way.)

DAVID KAMP has been a writer for Vanity Fair and GQ for over a decade, and began his career at Spy, the satirical New York monthly. STEVEN DALY is a Vanity Fair contributing editor, and in a previous life was a rock musician in his native Glasgow, playing drums for the band Orange Juice. Kamp and Daly live in New York City.
Loading...
or
Not Currently Available for Direct Purchase