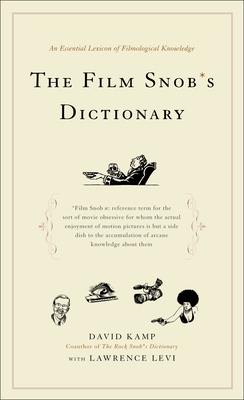 An Essential Lexicon of Filmological Knowledge

From the same brain trust that brought you The Rock Snob*s Dictionary, the hilarious, bestselling guide to insiderist rock arcana, comes The Film Snob*s Dictionary, an informative and subversively funny A-to-Z reference guide to all that is held sacred by Film Snobs, those perverse creatures of the repertory cinema. No longer must you suffer silently as some clerk in a “Tod Browning’s Freaks” T-shirt bombards you with baffling allusions to “wire-fu” pictures, “Todd-AO process,” and “Sam Raimi.” By helping to close the knowledge gap between average moviegoers and incorrigible Snobs, the dictionary lets you in on hidden gems that film geeks have been hoarding (such as Douglas Sirk and Guy Maddin movies) while exposing the trash that Snobs inexplicably laud (e.g., most chop-socky films and Mexican wrestling pictures). Delightfully illustrated and handily organized in alphabetical order for quick reference, The Film Snob*s Dictionary is your fail-safe companion in the video store, the cineplex, or wherever insufferable Film Snobs congregate.

Praise For The Film Snob*s Dictionary: An Essential Lexicon of Filmological Knowledge…

“A witty, often devastatingly funny, ultra-sophisticated guide for the uninitiated, the would-be cinephile’s equivalent to decrypting the Rosetta Stone. Even I had no idea that Clint Howard was a cult figure.” —Bruce Goldstein, Repertory Program Director, Film Forum (New York) and founder, Rialto Pictures

DAVID KAMP is a longtime writer for Vanity Fair, where short versions of The Film Snob*s Dictionary and the The Rock Snob*s Dictionary first appeared, and also contributes regularly to GQ. LAWRENCE LEVI has written about films and film culture for The New York Times, The Nation, and many other publications, and was a colleague of Kamp’s at Spy, the much-missed satirical magazine. Both Kamp and Levi live in New York.

ROSS MacDONALD’s illustrations have graced many major periodicals, including The New Yorker and Rolling Stone. He lives in Connecticut.
Loading...
or
Not Currently Available for Direct Purchase