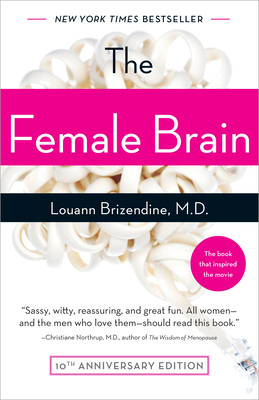 Since Dr. Brizendine wrote The Female Brain ten years ago, the response has been overwhelming. This New York Times bestseller has been translated into more than thirty languages, has sold nearly a million copies between editions, and has most recently inspired a romantic comedy starring Whitney Cummings and Sofia Vergara. And its profound scientific understanding of the nature and experience of the female brain continues to guide women as they pass through life stages, to help men better understand the girls and women in their lives, and to illuminate the delicate emotional machinery of a love relationship.

Why are women more verbal than men? Why do women remember details of fights that men can’t remember at all? Why do women tend to form deeper bonds with their female friends than men do with their male counterparts? These and other questions have stumped both sexes throughout the ages.

Now, pioneering neuropsychiatrist Louann Brizendine, M.D., brings together the latest findings to show how the unique structure of the female brain determines how women think, what they value, how they communicate, and who they love. While doing research as a medical student at Yale and then as a resident and faculty member at Harvard, Louann Brizendine discovered that almost all of the clinical data in existence on neurology, psychology, and neurobiology focused exclusively on males. In response to the overwhelming need for information on the female mind, Brizendine established the first clinic in the country to study and treat women’s brain function.

In The Female Brain, Dr. Brizendine distills all her findings and the latest information from the scientific community in a highly accessible book that educates women about their unique brain/body/behavior.

The result: women will come away from this book knowing that they have a lean, mean, communicating machine. Men will develop a serious case of brain envy.

Praise For The Female Brain…

“Finally, a satisfying answer to Freud’s question, ‘What does a woman want?’ Louann Brizendine has done a great favor for every man who wants to understand the puzzling women in his life. A breezy and enlightening guide to women—and a must-read for men.”
—Daniel Goleman, author of Social Intelligence

“The Female Brain is sassy, witty, reassuring, and great fun. All women—and the men who love them—should read this book.”
—Christiane Northrup, M.D., author of The Wisdom of Menopause

“Louann Brizendine has been a pioneer in using medical science to empower her women patients. Now she seeks to share her hard-won knowledge with a wider audience. The result is a timely, insightful, readable, and altogether magnificent book.”
—Sarah Blaffer Hrdy, author of Mother Nature

“An eye-opening account of the biological foundations of human behavior. Destined to become a classic in the field of gender studies.”
—Marilyn Yalom, author of A History of the Breast

“In a breezy, playful style, Brizendine follows the development of women’s brains from birth through the teen years, to courting, pregnancy, childbirth and child-rearing, and on to menopause and beyond.”
—Deborah Tannen, Washington Post

Louann Brizendine, M.D., a diplomate of the American Board of Psychiatry and Neurology and the National Board of Medical Examiners, is an endowed clinical professor of psychiatry at the University of California, San Francisco. She is founder and director of the Women’s Mood and Hormone Clinic. After receiving her degree in neurobiology at University of California, Berkeley, and her medical degree from Yale University School of Medicine, she completed an internship and residency in psychiatry at Harvard Medical School. She has served as faculty at both Harvard and UCSF. She sits on the boards of peer reviewed journals and is the recipient of numerous honors and awards.

Dr. Brizendine begins by describing the lack of clinical data on female neurology, psychology, and neurobiology she encountered as a medical student. How did years of emphasis on male subjects skew medical treatment for women and men alike? What did it take for physicians such as Dr. Brizendine to turn the tide?

Discuss the book’s discussion of gender and aggression in young children. What do these revelations, such as the fact that girls may inherently go through phases of bossiness as well as cooperatively taking turns, indicate about the way we should socialize children? Should our expectations of “acceptable” childhood behavior be altered in recognition of these innate patterns?

How does an understanding of the adolescent female brain ease or even alleviate your own memories of teenage angst? Which episodes seem less disconcerting when put in the context of physiology? Considering the way pleasure centers are stoked by gossip and sexual attractiveness takes priority, is it futile to try to tame the teen-girl brain?

What is the best way to reconcile the fact that most girls shun conflict while boys often enjoy it? What are the benefits and challenges of this contradiction? How do the adult manifestations of these features play out in the workplace?

Which aspects of Melissa and Rob’s case study regarding dating resonated the most with you? Can these findings be translated into a “prescription” for love? What lessons should single women take away from the observation that men are essentially chasers and women are choosers?

What surprised you in Dr. Brizendine’s chapter on sexual satisfaction? Did her distinctions between male and female orgasms differ from what you had previously believed? Does twenty-first-century dating accommodate these inherent gender differences?

What are the implications of the “mommy brain” for working mothers of newborns? Would it be beneficial or destructive if more fathers experienced the “daddy brain,” even extreme manifestations such as Couvade Syndrome? Do women inherently want to share the tasks of parenting?

Discuss the dangers and advantages of being able to read a man’s expressions with stealth and precision. If you were able to reduce your emotional attentiveness, would you do so?

With a better understanding of the inherently different communication styles possessed by men and women, can relationship woes be eased? Or is the communication gulf cause for despair?

Does American society embrace the wisdom of menopausal and post-menopausal women? Do contemporary grandmothers receive greater or less respect than in previous generations?

Based on the findings in Appendix One, how would you approach the controversial topic of hormone therapy? What is the best way to gain trustworthy advice on this subject from doctors?

What predictions can you make about shifting perceptions of gender wars in a culture that becomes more aware of neuroscience? How will the idealized and the fully realized woman be re-defined by our daughters?

How might the types of data revealed in Appendix Three shape future discussions about sexual orientation?

What do the book’s extensive notes and references indicate about the nature of current research? Which fields appear to be the most progressive? What types of research needs are being addressed? What research question would you want to explore if you were to design a study regarding the female brain?

What is the effect of reading about personal, often emotional topics through the lens of science? What disputes in previous generations could have been resolved with our current scientific knowledge about gender differences?

Which stage currently matches your status in Dr. Brizendine’s chart, “Phases of a Female’s Life”? In what ways does the chart help explain your past behavior and predict your future responses?