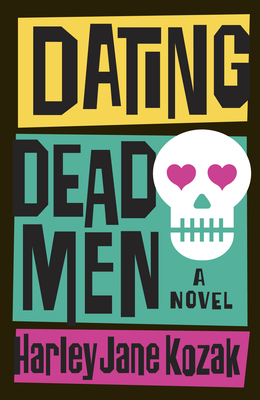 “Dating Dead Men, Harley Jane Kozak’s hilarious debut novel, proves that the search for love can be as funny as it is deadly.”—Kris Neri, author of the Agatha, Anthony and Macavity Award-nominated Tracy Eaton mysteries

Los Angeles greeting-card artist Wollie Shelley is dating forty men in sixty days as research for a radio talk show host's upcoming book, How to Avoid Getting Dumped All the Time. Wollie is meeting plenty of eligible bachelors but not falling in love, not until she stumbles over a dead body en route to Rio Pescado--a state-run mental hospital--and is momentarily taken hostage by a charismatic "doctor" who is on the run from the Mob. Wollie fears that her beloved brother, a paranoid schizophrenic living at Rio Pescado, is involved in the murder, so rather than go to the authorities, she decides to solve the crime on her own. As she meets up with an array of small-time crooks and swaggering mobsters only slightly more sinister than the men she’s been dating, Wollie realizes that "getting dumped" is the least of her problems. Finding true love, she discovers, sometimes means learning how to avoid getting killed . . .

Dating Dead Men will keep readers guessing until the final bullet is shot--and cheering for the irresistible Wollie as she makes her way out of confusion and into the welcoming embrace of Mr. Right.

“Dating Dead Men, Harley Jane Kozak’s hilarious debut novel, proves that the search for love can be as funny as it is deadly, as it ricochets from one madcap misadventure after another with the speed of a bullet and the uproarious fun of a three-ring circus. An absolutely delightful tale, told with warmth and charm.”
—Kris Neri, author of the Agatha, Anthony and Macavity Award-nominated Tracy Eaton mysteries

“Dating Dead Men is the funniest mystery I’ve read in ages. Any woman who has ever wondered how many more Mr. Wrongs she’ll have to date to meet Mr. Right will love this book.”
—Jan Burke, author of Nine

“Dating Dead Men is a page-turning romp alive with fresh, quirky characters and inventive situations that left me anxious for another date with Wollie Shelley, provided author Harley Jane Kozak is amenable next time around to a man who’s still breathing.”
—Robert S. Levinson, author of Hot Paint and The John Lennon Affair

“Wollie Shelley, Kozak’s entrepreneur extraordinaire, manages to deal with a murder, the Mafia, an appealing but mysterious love interest, and a killer who wants to see her dead, all with originality and humor.”
—Lee Harris, author of Murder in Hell’s Kitchen.

Harley Jane Kozak is an actor whose screen credits include Parenthood, The Favor, and Arachnophobia. She is the author of A Date You Can’t Refuse, Dating Dead Men, Dating Is Murder, and Dead Ex. She lives in Agoura Hills, California.
Loading...
or
Not Currently Available for Direct Purchase