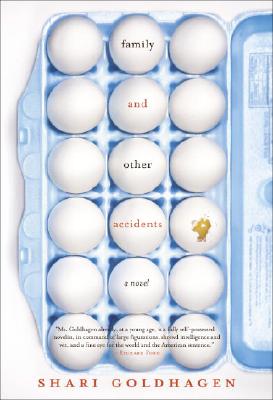 Family and Other Accidents

Separated by a decade and 200 points on their SAT scores, Jack and Connor Reed have a life in the Cleveland suburbs held together by spit and Chinese takeout. With his self-absorbed, over-the-hill parents dead by his twenty-fifth birthday, Jack has abandoned his own plans and returned to his parents house where he works marathon hours at his late father's law firm, beds young paralegals, and throws money and advice at his teenage brother. Connor meanwhile wants nothing more than to leave the Midwest, start a family early, and do everything the way his parents didn t. But over the years, through the car crashes and bad breakups, the illnesses and illicit affairs, both realize that while circumstances are sometimes beyond control, there are always choices to be made.
"Family and Other Accidents" tells the story of these brothers from their viewpoints as well as from those of their girlfriends, wives, and children. It is a story of what it means to be a family, to love unconditionally in the face of confusion, anger, and regret. Shari Goldhagen's debut is a finely nuanced, universally resonant portrait of the ties, however strange or awkward, that bind families together through the decades.

Praise For Family and Other Accidents…

“Jack and Connor are by turns joyous and sad, wise and foolish, fragile and tough, kind and mean, even cruel—but they are always human, always fresh, always surprising, always lovable even when we least want to love them.”
—Bill Roorbach, author of The Smallest Color and Big Bend

“Shari Goldhagen has the sharp eye and the keen ear—not to mention the generous heart—to make these characters’ stories ours.”
—Lee Abbott, author of All Things, All At Once and Love Is the Crooked Thing

“Goldhagen illuminates with some of the deftest, unchillingly ironic, emotionally complex, understated, subtly tender, winning writer I have ever read.”
—Michelle Herman, author of Dog

Shari Goldhagen holds an MFA from Ohio State and a journalism degree from Northwestern. A fellow of both Yaddo and MacDowell, she currently lives in New York City, where she has stalked celebrities for magazines, including "The National Enquirer," "Life & Style," and "Celebrity Living."
Loading...
or
Not Currently Available for Direct Purchase