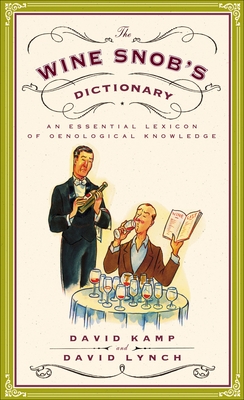 An Essential Lexicon of Oenological Knowledge

A nicely structured, lightly acidic addition to the handy Snob’s Dictionary series, decoding the baffling world of winespeak from A to Z.

Wine Snob. The very phrase seems redundant, doesn't it? When faced with this snobbiest of snobberies, the civilian wine enthusiast needs the help of savvy translators like David Kamp and David Lynch. Their Wine Snob’s Dictionary delivers witty explication of both old-school oeno-obsessions (What's claret? Who's Michael Broadbent?) and such new-wave terms as "malolactic fermentation" and "fruit bomb." Among the other things Kamp and Lynch demystify:

Finish: the Snob code-term for "aftertaste." (Robert Parker includes the stopwatch-measured length of a wine's finish in his ratings.)

Meritage: an American wine classification that rhymes with "heritage," and should NEVER be pronounced "meri-TAHJ."

Terroir: that elusive quality of vineyard soil that has sommeliers talking of "gunflint," "leather," and "candied fruits"

Featuring ripe, luscious, full-bodied illustrations by Snob's Dictionary stalwart Ross MacDonald, The Wine Snob’s Dictionary is as heady and sparkling as a vintage Taittinger, only much less expensive... and much more giggle-inducing. Cheers!

DAVID KAMP is a writer and editor for Vanity Fair and the author of The United States of Arugula, The Food Snob’s Dictionary, The Film Snob’s Dictionary, and The Rock Snob’s Dictionary. DAVID LYNCH is a James Beard Award—winning writer, sommelier, and restaurant manager, having served as wine director of Babbo Ristorante for seven years. Both authors live in New York City. ROSS MACDONALD’s illustrations have appeared in many publications, from The New Yorker to The Wall Street Journal.
Loading...
or
Not Currently Available for Direct Purchase