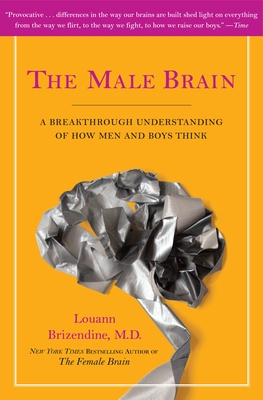 A Breakthrough Understanding of How Men and Boys Think

From the author of the groundbreaking New York Times bestseller The Female Brain, here is the eagerly awaited follow-up book that demystifies the puzzling male brain.

Dr. Louann Brizendine, the founder of the first clinic in the country to study gender differences in brain, behavior, and hormones, turns her attention to the male brain, showing how, through every phase of life, the "male reality" is fundamentally different from the female one. Exploring the latest breakthroughs in male psychology and neurology with her trademark accessibility and candor, she reveals that the male brain:

-is a lean, mean, problem-solving machine. Faced with a personal problem, a man will use his analytical brain structures, not his emotional ones, to find a solution.
-thrives under competition, instinctively plays rough and is obsessed with rank and hierarchy.
-has an area for sexual pursuit that is 2.5 times larger than the female brain, consuming him with sexual fantasies about female body parts.
-experiences such a massive increase in testosterone at puberty that he perceive others' faces to be more aggressive.

The Male Brain finally overturns the stereotypes. Impeccably researched and at the cutting edge of scientific knowledge, this is a book that every man, and especially every woman bedeviled by a man, will need to own.

Praise For The Male Brain: A Breakthrough Understanding of How Men and Boys Think…

"In this utterly fascinating follow-up to her bestselling The Female Brain, Harvard neuropsychiatrist Brizendine leads readers through the lifespan of a man's brain, using lively prose and personable anecdotes to turn complex scientific research into a highly accessible romp. Among other salient info, readers will learn why it is what young boys seem unable to stay still (they are learning through "embodied cognition"); why behaviors may change so suddenly during puberty (among other changes, testosterone increases 20-fold); the nature of irritability in teens ("boys' hormones prime them for aggressive and territorial behaviors"); and the ways in which chemicals, physical touch, and play bond fathers with their children. With clearly detailed scientific explanations for how characteristics like anger expression, analysis of facial expression, and spatial manipulation differ between the sexes, Brizendine's review of brain and behavioral research should net a broad audience, from parents of boys to psychology students to fans of her first volume. Brizendine also includes an appendix regarding the brain and sexual orientation, as well as lengthy endnotes and an exhaustive reference list."--Publishers Weekly, Starred Review

"As a woman who has known complicated men her whole life, I can't help but wish The Male Brain had been around when I was a girl. Dr. Louann Brizendine's lucid, lively, and always fascinating discussion of how the male brain works (and why) has enlightened me in more ways than I can count. Now I can't wait to give the book to all my women friends."
—Jane Fonda, actress and author of My Life So Far

"Dr. Brizendine has marshaled a host of impressive data and insights and presented them in an elegant and entertaining way to clearly illustrate men's reality--as infants, boys, teens, lovers, husbands, fathers and workers. It's a deep dive into the worlds of men, as well as a fascinating read. And along the way, you will pick up some valuable tips to help you understand, appreciate and connect with the men in your life."
--Helen Fisher, Ph.D., author of Why Him? Why Her?

"It takes an extraordinary woman like Dr. Louann Brizendine to understand the male brain. She brings the latest in state-of-the-art science in helping us to understand the most ancient and primal of male passions and desires--and viva le difference! Highly recommended."
-Dean Ornish, author of The Spectrum

"The remarkable brain science behind Mars and Venus in a really enjoyable read! I think that this book, along with The Female Brain should be read by every parent, child, husband, wife, employer, employee, and dating age adult – they bring love and understanding into our most important, and sometimes most frustrating relationships."
-Martin L. Rossman, M.D., Clinical Faculty, UCSF; Founder, TheHealingMind.org, Clinical Professor of Medicine, University of California, San Francisco

"Louann Brizendine has done a great favor for every man who wants to understand the puzzling women in his life. A breezy and enlightening guide to women and a must-read for men."
—Daniel Goleman, author of Emotional Intelligence

Louann Brizendine, M.D., a diplomate of the American Board of Psychiatry and Neurology and the National Board of Medical Examiners, is an endowed clinical professor of psychiatry at the University of California, San Francisco. She is founder and director of the Women’s Mood and Hormone Clinic. After receiving her degree in neurobiology at University of California, Berkeley, and her medical degree from Yale University School of Medicine, she completed an internship and residency in psychiatry at Harvard Medical School. She has served as faculty at both Harvard and UCSF. She sits on the boards of peer reviewed journals and is the recipient of numerous honors and awards.
or support indie stores by buying on