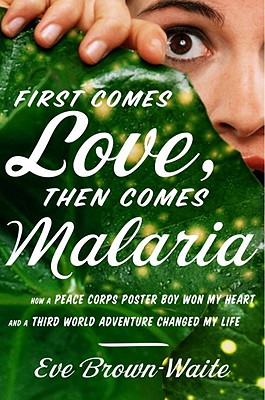 In this laugh-out-loud funny memoir, a pampered city girl falls head over little black heels in love with a Peace Corps poster boy and follows him —literally–to the ends of the earth.
Eve Brown always thought she would join the Peace Corps someday, although she secretly worried about life without sushi, frothy coffee drinks and air conditioning.  But with college diploma in hand, it was time to put up or shut up. So with some ambivalence she arrives at the Peace Corps office–sporting her best safari chic attire –to casually look into the steps one might take if one were to become a global humanitarian, a la Angelina Jolie.  But when Eve meets John, her dashing young Peace Corps recruiter, all her ambivalence flies out the window. She absolutely must join the Peace Corps - and win John's heart in the process. Off to Ecuador she goes and - after a year in the jungle - back to the States she runs, vowing to stay within easy reach of a decaf cappuccino for the rest of her days.

But life had other plans.  Just as she's getting reacquainted with the joys of toilet paper, John gets a job with CARE and Eve must decide if she’s up for life in another third world outpost. Before you can say, "pass the malaria prophylaxis," the couple heads off to Uganda, and the fun really begins--if one can call having rats in your toilet fun. Fortunately, in Eve’s case one certainly can, because to her, every experience is an adventure to be embraced and these pages come alive with all of the alternatively poignant and uproarious details.
With wit and candor, First Comes Love, then Comes Malaria chronicles Eve’s misadventures as an aspiring do-gooder. From intestinal parasites to getting caught in a civil war, culture clashes to unexpected friendships, here is an honest and laugh-out-loud funny look at the search for love and purpose—from a woman who finds both in the last place she expected.
AUTHOR BIO
EVE BROWN-WAITE was a finalist for Iowa Review, Glimmer Train, and New Millennium Writings Awards for stories she wrote about her time abroad. She lives with her husband and two children in Massachusetts.

EVE BROWN-WAITE was a finalist for "Iowa Review," "Glimmer Train," and "New Millennium Writings" awards for stories she wrote about her time abroad. She lives with her husband and two children in Massachusetts.

Praise For First Comes Love, then Comes Malaria: How a Peace Corps Poster Boy Won My Heart and A Third World Adventure Changed My Life…

“Eve Brown-Waite writes as she lives - with verve and humor and a fine sense of the absurd."
--Maarten Troost, author of Lost on Planet China


"A must, must, must read. You will laugh, laugh, laugh at this account of how you can do good and laugh away your stress all at the same time."
--Loretta LaRoche, author of Kick Up Your Heels Before You're Too Short to Wear Them


"Eve Brown-Waite had me at "Jambo." Her hilarious, charming and honest memoir about evolving from someone who merely shops at Banana Republic to someone who wants to save banana republics is an un-putdownable must-read."
-Jenny Gardiner, author of Sleeping with Ward Cleaver

"Eve Brown takes you on a wild, engrossing, and totally unpredictable ride with laughs and tears along the way. A wonderful debut!"
-Mia King, author of Good Things

"First Comes Love, Then Comes Malaria is infectious! Once you start it- you can't put it down."
--Eileen Cook, author of Unpredictable and What Would Emma Do?

“Proof positive that you CAN help the world, fall in love, survive malaria and a civil war AND laugh all at the same time. Eve Brown-Waite is a talented debut writer who better be writing a sequel because I want to know happens next!
--Gail Konop Baker, author of Cancer is a Bitch: Or, I'd Rather be Having a Midlife Crisis


"First Comes Love, Then Comes Malaria is a hilarious, smart and compelling debut. Eve Brown-Waite vividly captures the ex-pat experience, the paradox of trying to save the world while desperately craving a cappuccino and proves that in some locales, you can be a little bit pregnant. The result is a grand adventure, love story and journey of self-discovery that you will not be able to put down."--Danielle Younge-Ullman, author of Falling Under