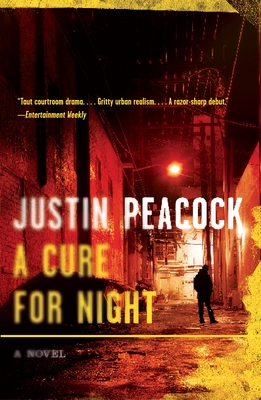 A Cure for Night

Joel Deveraux is a rising star at a white-shoe law firm in Manhattan. But after a drug-related scandal costs him his job and nearly his law license, he slides down the corporate ladder to the Booklyn Defenders office. He arrives just in time for a high profile murder case, where he is assigned to work with the tough and savvy Myra Goldstein. With pressure from their boss and interest from the tabloids, they take on the defense of a black pot dealer from the projects who is charged with the murder of a white college student. Joel quickly learns that urban criminal law is a form of combat where the best story wins–but who’s telling the truth and who’s lying are matters of life and death.

Praise For A Cure for Night: A Novel…

"[Peacock] heads toward Scott Turow country. . . . Based on his work here, he's got a good chance to make partner." —The New York Times Book Review

"A fresh view of the legal system, the drug trade, and an insider's view of Brooklyn. . . . Riveting." —Florida Sun-Sentinel

"A lively, dialogue-driven story of life on the streets and in the courtroom, and in both arenas, anything goes." —USA Today

"Terrific. . . . Chilling . . . . When the prizes are awarded for this year's best first novel, A Cure for Night will be competing for the gold." —Washington Post

"Welcome to Brooklyn's criminal courts and the next generation of courtroom novelists. . . . A strong debut." —New York Post

"Fascinating. . . . Intriguing. . . . [There are] lots of surprises lurking within its pages." —Fredericksburg Free Lance-Star

"A Cure for Night compares favorably with such works as Robert Traver"s Anatomy of a Murder and Scott Turow's Presumed Innocent. The courtroom exchanges are scintillating, the action away from the bench is suspenseful, and the conclusion is surprising." —Nashville Tennessean

"Peacock's gritty look at the bowels of the legal system is informed by his legal training, and he paints a complicated, engaging portrait of a city where it's a five-minute walk from high rises to low life." —National Public Radio

"The best courtroom drama in recent memory, as good as what Scott Turow and John Grisham gave us in their prime." —The Rap Sheet

"Remarkable. . . . [Peacock] is a gem of a writer, storyteller, and moralist." —Washington Lawyer

"Haunting, seductive and dead-on-the-mark, A Cure for Night is the best courtroom novel in a generation." —Mark Costello

Justin Peacock received an MFA from Columbia University and a law degree from Yale. Prior to attending law school, he worked as an online producer at the New York Times. His legal experience ranges from death-penalty defense to First Amendment cases. He lives in Brooklyn.

www.justinpeacock.net
Loading...
or
Not Currently Available for Direct Purchase