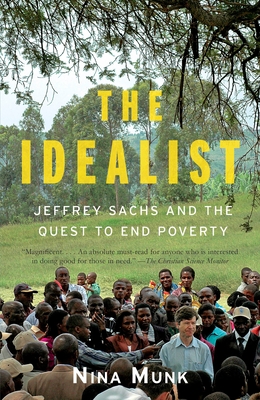 Jeffrey Sachs and the Quest to End Poverty


In 2006, Jeffrey Sachs—celebrated economist, special advisor to the Secretary General of the United Nations, and author of the influential bestseller The End of Poverty— launched the Millennium Villages Project, a daring, $120-million experiment designed to test his theories about ending poverty. For six years, Nina Munk shadowed Sachs on his trips to Africa, listened in on conversations with heads-of-state and humanitarian organizations, and immersed herself in the lives of people in two remote African villages.  Munk came to understand the real-life issues that challenge Sachs’s formula for ending global poverty. The Idealist is the profound and moving story of what happens when the abstract theories of a brilliant, driven man meet the realities of human life.

Praise For The Idealist: Jeffrey Sachs and the Quest to End Poverty…


"Munk draws a nuanced portrait of Sachs and his Millennium Villages Project . . . worth taking the time to read it. It’s a valuable—and, at times, heartbreaking—cautionary tale." —Bill Gates

"A sharply rendered and deeply disillusioned account of [Jeffrey Sachs'] personal quest to end poverty. . . . With impressive persistence, unflagging empathy and journalistic derring-do, Ms. Munk returns over a five-year period to Dertu and one other village to document the project's progress. . . . Heartbreaking." —The Wall Street Journal

"One of the most readable and evocative accounts of foreign aid ever written, The Idealist shows that virtually nothing about such aid is ever easy. . . .  A masterful tale of good intentions gone wrong." —William Easterly, Barron’s

“A stark reminder that the war against poverty is not yet won. A must-read.” —Dambisa Moyo, author of Dead Aid

"Writing accessibly about development economics is a high-wire act, but Munk accomplishes it brilliantly. She shadows Sachs as he cajoles world leaders to fund his Millennium projects, and also visits those places to tell the whole story. The final chapter, in which Munk interviews a chastened Sachs (usually an oxymoron), is particularly devastating." —Foreign Policy

"A fascinating portrait of an innovative thinker as well as a fair-minded examination of his methods. It’s also a testament to the enduring value of old-fashioned, shoe-leather reporting—it should be read not just in policy circles but also at J-schools." —Vanity Fair

“Magnificent. . . .  An absolute must-read for anyone who is interested in doing good for those in need.” —The Christian Science Monitor

"Munk tracks a messianic economist’s quixotic attempts to show that he can end African poverty. In one village his team gets farmers to grow maize instead of traditional matoke; there are no buyers for the bumper crop, and rats end up eating much of it. Munk describes a growing gulf between good intentions and hard reality with nuance and sensitivity." —Forbes

"An engaging, eye-opening read." —The Guardian

"The Idealist tracks the messianic economist Jeffrey Sachs’s doomed attempt to solve African poverty by establishing a network of model villages where his pet theories could be tested before being escalated. The author, Nina Munk, who spent six years interviewing Sachs and visiting the Millenium Villages, is a delicate, careful writer. She not only reminds us that there are good, solid reasons why certain areas of the world remain desperately poor, she raises troubling questions about the credibility of an economist embraced by rock singers and film stars." —The Spectator

"A fine writer with a gift for deploying spare, vivid detail, Munk overcomes the burden of what could be duller-than-dirt subject matter—the politics of foreign aid; the ins and outs of Uganda's matoke market; NGO infighting over anti-malaria efforts—into a lively and at times, quite funny book." —Fortune

"A deep and important book. . . . The Idealist tells the stories behind the numbers and its evidence is as compelling and as important as anything in the data." —The Lancet

"Munk is a sly, relentless reporter with a gift for wedding her observations to a fluent, even graceful, writing style" —The Globe & Mail

"This book is stark proof that approach just does not work. . . . The world needs to pay attention to these lessons and stop wasting resources." —Bloomberg

"Written over six years, with exhaustive on-the-ground reporting from two African communities that are part of MVP village clusters, [Nina] Munk’s book is a readable and fast-paced chronicle of the real-world consequences of elite intellectual arrogance....Munk’s authoritative telling of Sach’s story is most valuable as an exhortation to intellectual humility, and a compulsively readable portrait of a man without any." —Commentary

"A fascinating and essential exploration of what goes wrong when unchecked audacity and clinical precision encounter the frailties, ambiguities, and unpredictabilities of human beings, societies and histories." —The Cleveland Plain Dealer

"Not only an important book, but a truly enjoyable read. She does not boast, but the reader cannot avoid the impression that her intrepid years in Sachsland have demanded all the inner steel of the most hardened explorer or war correspondent." —The Weekly Standard

“Students of economic policy and altruistic do-gooders alike will find Munk’s work to be a measured, immersive study of a remarkable but all-too-human man who let his vision get the best of him.” —Publishers Weekly

"A fine contrarian polemic full to brimming with excellent reporting." —The Globe & Mail

"Heart-rending. . . . The catalogue of bright ideas that go awry would be funny if it weren’t so tragic." —National Post

"A testament to the enduring value of old-fashioned, shoe-leather reporting—it should be read not just in policy circles but also at J-schools.” —Vanity Fair Daily

"A devastating portrait of hubris and its consequences.” —Pacific Standard

"A fascinating and essential exploration of what goes wrong when unchecked audacity and clinical precision encounter the frailties, ambiguities, and unpredictabilities of human beings, societies and histories.” —The Cleveland Plain Dealer

“Nina Munk has written a fascinating book about a fascinating man—and even more important, about a set of ideas that are intriguing and important.” —Fareed Zakaria, editor-at-large of Time magazine and author of New York Times Bestseller The Post-American World

“Jeffrey Sachs is a global phenomenon: no one thinks as big, makes a more passionate case for foreign aid, and works as hard to make the dream of ending global poverty a reality. This terrific book gives you a ringside seat on Sachs’s tireless global quest to get donors, governments, international agencies, private firms, and poor farmers to buy into his vision of economic development. Nina Munk’s portrayal goes beyond the man and his dream; it is a clear-headed depiction of the challenges the world’s poorest face as they struggle to improve their lives.” —Dani Rodrik, Professor of International Political Economy at Harvard University and author of The Globalization Paradox

"A riveting narrative that must be read to understand why the over $700 billion pumped into Africa by the West since 1960 has achieved so little. This powerful book will shake up the foreign aid development community." —George Ayittey, President of the Free Africa Foundation, and author of Africa Unchained

"A powerful exposé of hubris run amok, drawing on touching accounts of real-life heroes fighting poverty on the front line." —Robert Calderisi, author of The Trouble with Africa

“The Idealist confirms that in the quest to end extreme poverty in Africa, the truly wise and resonant voices are those of the Africans themselves.”  —Roger Thurow, author of The Last Hunger Season

"Nina Munk’s incisive, moving and elegantly written report takes us to Africa to see first-hand that the poor don’t need one more central planner with the prescription for prosperity. What the poor need is what really made the rich rich – the legal devices to join their continent’s vast, dispersed natural and human resources into valuable combinations through their own collective action." —Hernando de Soto, President of the Institute for Liberty and Democracy, and author of The Mystery of Capital