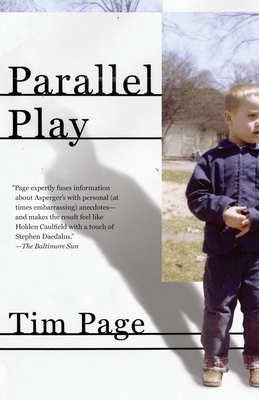 An affecting memoir of life as a boy who didn’t know he had Asperger’s syndrome until he became a man.

In 1997, Tim Page won the Pulitzer Prize for Criticism for his work as the chief classical music critic of The Washington Post, work that the Pulitzer board called “lucid and illuminating.” Three years later, at the age of 45, he was diagnosed with Asperger’s syndrome–an autistic disorder characterized by often superior intellectual abilities but also by obsessive behavior, ineffective communication, and social awkwardness.

In a personal chronicle that is by turns hilarious and heartbreaking, Page revisits his early days through the prism of newfound clarity. Here is the tale of a boy who could blithely recite the names and dates of all the United States’ presidents and their wives in order (backward upon request), yet lacked the coordination to participate in the simplest childhood games. It is the story of a child who memorized vast portions of the World Book Encyclopedia simply by skimming through its volumes, but was unable to pass elementary school math and science. And it is the triumphant account of a disadvantaged boy who grew into a high-functioning, highly successful adult—perhaps not despite his Asperger’s but because of it, as Page believes. For in the end, it was his all-consuming love of music that emerged as something around which to construct a life and a prodigious career.

In graceful prose, Page recounts the eccentric behavior that withstood glucose-tolerance tests, anti-seizure medications, and sessions with the school psychiatrist, but which above all, eluded his own understanding. A poignant portrait of a lifelong search for answers, Parallel Play provides a unique perspective on Asperger’s and the well of creativity that can spring forth as a result of the condition.

Tim Page is a professor of journalism and music at the University of Southern California. He has been a music critic at the New York Times, Newsday, and The Washington Post. In 1997, Tim Page won the Pulitzer Prize for Criticism for his work as the chief classical music critic of The Washington Post, work that the Pulitzer board called “lucid and illuminating.” He has also written a biography of the American novelist Dawn Powell, as well as edited her letters and a two-volume edition of her works published by The Library of America.

"Simply lovely. . . . Page does not glorify or mythologize his condition, nor does he render a portrait of a soul victimized by circumstance. The view from this window is merely one of the human condition, painted in emotions known to us all, yet rarely so finely drawn." —Los Angeles Times

"An improbably lovely memoir. . . . In fascinatingly precise detail and often to pricelessly funny effect, [Page] describes ways in which his efforts to feign normalcy have backfired." —The New York Times

"The wordsmithing is nimble and lyrical, well-tuned by a writer with a musician's ear." —The Washington Post Book World

"Fascinating. . . . In this tender but unsparing look back, Page . . . [leaves] readers to ponder how a condition that bedevils and isolates can also yield magicianly talent, originality, and grit." —O, The Oprah Magazine

"Parallel Play tells of Tim's journey from lonely boy genius to Pulitzer-winning writer. One thing becomes clear: Tim's sharp and incisive insights into music and the arts were made possible by Asperger's syndrome, the very condition some see as a disability. I guarantee you'll be inspired, amused, occasionally saddened and deeply touched by his story."  —John Elder Robison, author of Look Me in the Eye

"A lucid, sweetly sentimental testament to growing up different." —Kirkus

"Tim Page has written an autobiography that is remarkable in terms of eloquently describing the life of someone who has Asperger's syndrome. Being an accomplished and celebrated writer, his vivid use of language captivates the reader. Those who have Asperger's syndrome, and their family members, will identify with Tim's experiences; professionals will appreciate the descriptions of thoughts and perceptions, enabling them to achieve a greater understanding of the syndrome. The casual reader will enjoy the work of a master craftsman." —Tony Attwood

"Parallel Play is a beautifully written account of Asperger's syndrome, a riveting portrayal of what it is like to live in a psychological world that few understand. Tim Page has made this world real, poignant, and more comprehensible. He has written a fascinating and important book."  —Kay Redfield Jamison, Ph.D., author of An Unquiet Mind and Professor of Psychiatry at The Johns Hopkins School of Medicine

"The usual stuff of teenage years—sex, drugs, and rock 'n' roll—viewed through the unusual prism of Asperger's syndrome makes for a fascinating YA read." —Booklist