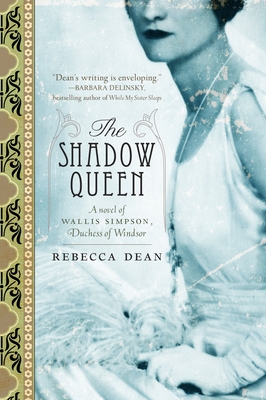 A Novel of Wallis Simpson, Duchess of Windsor

King Edward VIII abdicated his throne for her in one of the world’s great love stories – but who was Wallis Simpson?

Born into a poor southern family but taken in by rich relatives, Wallis Simpson was raised as a socialite. Between family conflicts and debutante balls, she and her friends dream of their future husbands, and like millions of girls worldwide, dream of Prince Edward, the heir to the British throne who would someday be king.

Beloved author Rebecca Dean imagines the early life of Wallis Simpson, her triumphs and heartbreaks, and the making of the twice divorced, nearly destitute woman who captured a king’s heart and changed the course of history. Set against a background of high society, royal circles, and diplomatic intrigue, The Shadow Queen features one of the most fascinating and controversial women of the 20th century.

REBECCA DEAN is the author of The Palace Circle and The Golden Prince. She was born in Yorkshire, England, and lives in London with her husband and two dogs.

Praise For The Shadow Queen: A Novel of Wallis Simpson, Duchess of Windsor…

“Even Brits determined to keep hating "that woman" might murmur "you go girl!" by the final page of Rebecca Dean's engrossing The Shadow Queen. Based on Wallis Simpson's life, the novel sympathetically depicts how a penniless, fatherless girl used brains, guts and charm to become the glam American divorcée for whom a king gave up his throne in 1936." –USA Today

“Simpson’s story is compelling…it is fun to imagine what circumstances catapulted this supporting player firmly onto center stage.” –Booklist

"The book is a mix of fact and fiction that plays out against a background of high-society living, royal house parties, diplomatic missions and the world's involvement in the Great War…Dean's main task is to depict the transformation of an unremarkable young person into the kind of woman capable of motivating a man to give up a country in exchange for her love.” –Star Tribune

“The details of Wallis Simpson's life are well known, but seriously, what was going on in her head? A novelist imagines.” –Denver Post
or
Not Currently Available for Direct Purchase
Copyright © 2020 American Booksellers Association