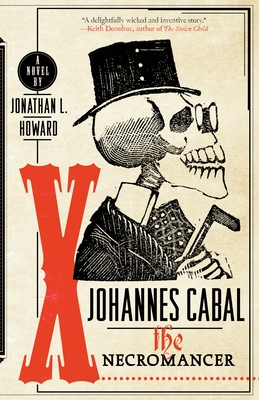 “Step back, Faust, there's a new game in town. Johannes Cabal is the necromancer with the heart of gold, determined to get his soul back whatever the price -- to others, that is. Morbidly hilarious, dry, and with few illusions about the nature of humanity, Howard spins an excellent gothic tale with an unexpectedly uplifting ending.”
— Jenn Northington, The King's English, Salt Lake City, UT
View the List

A charmingly gothic, fiendishly funny Faustian tale about a brilliant scientist who makes a deal with the Devil, twice.

Johannes Cabal sold his soul years ago in order to learn the laws of necromancy. Now he wants it back. Amused and slightly bored, Satan proposes a little wager: Johannes has to persuade one hundred people to sign over their souls or he will be damned forever. This time for real. Accepting the bargain, Jonathan is given one calendar year and a traveling carnival to complete his task. With little time to waste, Johannes raises a motley crew from the dead and enlists his brother, Horst, a charismatic vampire to help him run his nefarious road show, resulting in mayhem at every turn.

“Witty, inventive, and thoroughly entertaining, this rollicking Faustian adventure grabs the reader and holds him until the very last page.” --Tucson Citizen

"The spot-on work of a talented writer." --Denver Post

“Howard makes it look easy to paint a soul-stealing murdering necromancer as a sympathetic character; that, folks, is worth the price of admission. Step right up!” —San Diego Union-Tribune

“For anyone whose taste edges towards the intelligent and macabre, this book is a gift." —Fangoria

“Populated with some of the most creative, and odd, characters to be found . . . hysterical and fascinating.”—Bookgeeks

"A delightfully wicked and inventive story." --Keith Donohue, author of The Stolen Child

“Cross Susannah Clarke's Jonathan Strange & Mr. Norrell with Gregory Maguire's Wicked, and you have this witty and sometimes touching debut novel in the Faustian tradition.”—Library Journal

“That ole black magic has never been more fun than it is in this deft and quirky Faustian take. A diabolical romp.” —Elle Newmark, author of The Book of Unholy Mischief

Jonathan L. Howard is a game designer who notably co-scripted the first three Broken Sword adventure games. He is the author of the novel Johannes Cabal the Necromancer. He lives near Bristol, England, with his wife and daughter.