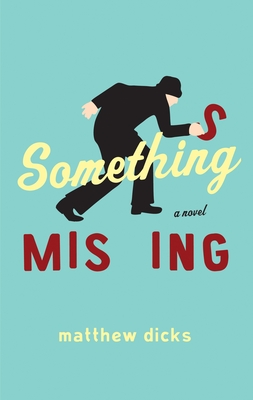 "The story of an obsessive-compulsive housebreaker whose every waking moment is jam-packed with finicky clockwork ritual--the kind of intense micro-planning that might have made even Napoleon back off...Matthew Dicks has created an unforgettable character that will have you torn between wanting to throttle him--or adopt him."
--Alan Bradley, author of the New York Times bestselling Flavia de Luce novels

A career criminal with OCD tendencies and a savant-like genius for bringing order to his crime scenes, Martin considers himself one of the best. After all, he’s been able to steal from the same people for years on end—virtually undetected. Of course, this could also be because of his unique business model—taking only items that will go unnoticed by the homeowner. After all, who would notice a missing roll of toilet paper here, a half-used bottle of maple syrup there, or even a rarely used piece of china buried deep within a dusty cabinet?

Even though he's never met these homeowners, spending hours in their houses, looking through their photo albums and reading their journals, he feels like he knows them. So Martin decides to meddle more in their lives—playing the part of a rather odd guardian angel—even though it means breaking many of his neurotic rules.

In this hilarious, suspenseful and often profound novel about a man used to planning every second of his life, Martin comes to realize that life is much better lived on the edge (at least some of the time).

Praise For Something Missing: A Novel…

"Who wants to catch a thief when he's as endearing as Martin Railsback, the oddball hero of Matthew Dicks's first novel, SOMETHING MISSING? Martin is, after all, prone to rob people of items they'll never miss (a bar of soap, a few sticks of butter, the odd diamond) as a way of getting to know them. Despite his obsessive-compulsive work ethic, Martin manages to get himself in trouble over a toothbrush--but not before we've decided to let him in next time he calls." --New York Times Book Review

"This is a splendid novel, written with loving attention to character and detail; Martin is so vividly realized that he threatens to step off the page and into the reader’s own living room. A loopier Bernie Rhodenbarr? A less lethal Dexter? Martin falls somewhere in between, but with a little word of mouth and some shrewd promotion, he could be the next big thing." --Booklist, starred review

"Dicks has dreamed up an unusual premise and twisted it so that the reader is rootting for 'the bad guy.'...Read Something Missing this summer and join the fun as Martin's life and crimes become more than he ever imagine." --The Free Lance-Star

"Dicks combines the neurotic atmosphere of a Woody Allen film wiht the light touch of Lawrence Block's Bernie Rhodenbarr novels (The Burglar Who Thought He Was Bogart, 1995, etc) in a unique debut. The fantastically bizarre leading man, obsessive-compulsive Marin Railsback, specializes in stealing things that no one notices have gone missing... Dicks expertly crafts the setup, showing us Martin's deep-seated need for stability and routine, then turning his world on its head when the compulsive thief accidentally knocks a client's toothbrush into the toilet. This necessitates a nerve-racking, breathless mission to replace it--while its owner is home, no less. Turning a philosophical corner, Martin embarks on an altruistic mission, trying to make his clients' lives a little better without their knowledge and risking his own tenuous subsistence in the bargain. A very funny adventure about the mechanics of burglary and the fragility of an orderly life." --Kirkus Reviews

“A quirky and endearing first novel that makes you wonder if that misplaced stick of butter or can of soup means there’s a burglar prowling your pantry. If that thief is Martin Railsback, you might be glad. He’s the kind of burglar you could conceivably want in your house.” —M. Ann Jacoby, author of Life After Genius

“A funny, suspenseful and thoroughly original debut that will keep you up to the wee hours flipping pages.” —David Rosen, author of I Just Want My Pants Back

MATTHEW DICKS is a writer and elementary school teacher. His articles have been published in the Hartford Courant, he has been a featured author at the Books on the Nightstand retreat, and he is a Moth StorySLAM champion. He is the author of three other novels, including Unexpectedly Milo, The Perfect Comeback of Caroline Jacobs, Memoirs of an Imaginary Friend, an international bestseller. His novels have been translated into more than 25 languages. He lives in Newington, Connecticut, with his wife, Elysha, and their two children.