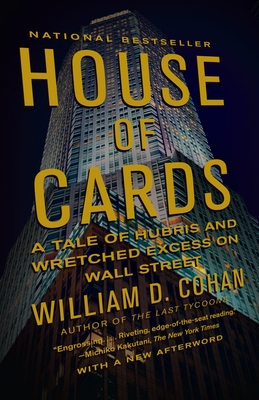 A blistering narrative account of the negligence and greed that pushed all of Wall Street into chaos and the country into a financial crisis.

At the beginning of March 2008, the monetary fabric of Bear Stearns, one of the world’s oldest and largest investment banks, began unraveling. After ten days, the bank no longer existed, its assets sold under duress to rival JPMorgan Chase. The effects would be felt nationwide, as the country suddenly found itself in the grip of the worst financial mess since the Great Depression. William Cohan exposes the corporate arrogance, power struggles, and deadly combination of greed and inattention, which led to the collapse of not only Bear Stearns but the very foundations of Wall Street.

Praise For House of Cards: A Tale of Hubris and Wretched Excess on Wall Street…

“Engrossing . . . a parable about how the second Gilded Age came slamming to a fast and furious end. . . . Riveting, edge-of-the-seat reading.” —Michiko Kakutani, The New York Times

"Masterfully reported. . . . [Cohan] does a brilliant job of sketching in the eccentric, vulgar, greedy, profane and coarse individuals who ignored all these warnings to their own profit and the ruin of so many others."--Los Angeles Times

"A masterly reconstruction of Bear Stearns’ implosion—a tumultuous episode in Wall Street history that still reverberates throughout our economy today. . . . First drafts of history don't get much better than this." —Bloomberg News

“This book is so rich, so flavorful, so instructive, and so fully and compelling cast that a reviewer hardly knows where to begin.” —The New York Observer

"Cohan vividly documents the mix of arrogance, greed, recklessness, and pettiness that took down the 86-year-old brokerage house and then the entire economy. It's a page-turner . . . offering both a seemingly comprehensive understanding of the business and wide access to insiders. . . . Hard to put down." —BusinessWeek

“Cohen’s autopsy uncovers all the symptoms of a walking disaster.” —Newsweek

WILLIAM D. COHAN, a former senior Wall Street investment banker, is the bestselling author of The Last Tycoons and the winner of the 2007 FT/Goldman Sachs Business Book of the Year Award. He is an online columnist for The New York Times, and writes frequently for Vanity Fair, Fortune, ArtNews, The Financial Times, the Washington Post and the Daily Beast.  He also appears frequently on CNN, Bloomberg TV and CNBC, and also on numerous NPR shows.
Loading...
or support indie stores by buying on