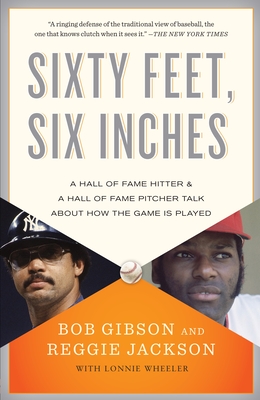 Bob Gibson and Reggie Jackson offer a candid and unfiltered look at America's pastime, discussing the art of pitching, the art of hitting, and all things baseball.

Full of brush-backs, walk-off homeruns, high stakes, cold stares, epic battles, and a little chin music here and there, Sixty Feet, Six Inches is a baseball fan’s dream come true, a go to guide for how the game should be played. There is no part of the sport that these two titans do not discuss at length: big picture issues like how steroids have affected the game and handling the pressure of stardom, right next to exact descriptions of the mechanics of pitching and hitting. Filled with one-of-a-kind insider stories that recall a who's who of baseball nobility, including Willie Mays, Alex Rodriguez, Hank Aaron, Albert Pujols, Billy Martin, and Joe Torre, it is an unforgettable baseball history by two of the game’s greatest superstars.


Praise For Sixty Feet, Six Inches: A Hall of Fame Pitcher & a Hall of Fame Hitter Talk About How the Game Is Played…

“A ringing defense of the traditional view of baseball, the one that knows clutch when it sees it.”—The New York Times

“Gibby and Reggie finally share their perspectives as two of the fiercest competitors who ever played the game. Trust me…It’s a great read.”-- Joe Torre

"A unique look inside the game for any fan and a gold mine of information for a young player. In fact, it ought to be required reading for any aspiring player."--Baseball America

"If you want to understand baseball’s game inside the game between the pitcher and the hitter, this is it. Two of the greats have written a classic." --Willie Mays

“Fans will come away from this discussion between greats with even greater understanding and appreciation for the game.”—Publishers Weekly

“Two giants of baseball discussing the game they love. This is a fun book!”--Joe Morgan

“Love it. Two of the most dominating personalities in the game, one from each side of the plate. . . . This is a fun read. I recommend this book to all.” --Johnny Bench

Bob Gibson, a two-time Cy Young Award winner and nine-time All Star, won 251 games and achieved a lifetime ERA of 2.91 during his seventeen years with the St. Louis Cardinals. He is a special adviser to the Cardinals.

Reggie Jackson hit 563 home runs and drove in 1,702 runs over the course of his twenty-one-year career; he played three World Series-winning seasons with the Oakland Athletics, and two with the New York Yankees. He is a special adviser to the Yankees.

Lonnie Wheeler collaborated with Bob Gibson and Hank Aaron on their autobiographies and is the author of two other books about baseball.