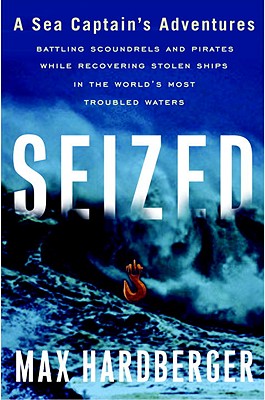 Seized throws open the hatch on the shadowy world of maritime shipping, where third-world governments place exorbitant liens against ships, pirates seize commercial vessels with impunity, crooks and con artists reign supreme on the docks and in the shipyards—and hapless owners have to rely on sea captain Max Hardberger to recapture their ships and win justice on the high seas.

A ship captain, airplane pilot, lawyer, teacher, writer, adventurer, and raconteur, Max Hardberger recovers stolen freighters for a living.  In Seized, he takes us on a real-life journey into the mysterious world of freighters and shipping, where fortunes are made and lost by the whims of the waves.  Desperate owners hire Max Hardberger to “extract” or steal back ships that have been illegitimately seized by putting together a mission-impossible team to sail them into international waters under cover of darkness.  It’s a high stakes assignment—if Max or his crew are caught, they risk imprisonment or death.

Seized takes readers behind the scenes of the multibillion dollar maritime industry, as he recounts his efforts to retrieve freighters and other vessels from New Orleans to the Caribbean, from East Germany to Vladivostak, Russia, and from Greece to Guatemala.  He resorts to everything from disco dancing to women of the night to distract the shipyard guards, from bribes to voodoo doctors to divert attention and buy the time he needs to sail a ship out of a foreign port without clearance.  Seized is adventure nonfiction at its best.

Praise For Seized: A Sea Captain's Adventures Battling Scoundrels and Pirates While Recovering Stolen Ships in the World's Most Troubled Wa…

“In this heart-stopping account of his work recovering stolen (or otherwise illegally-seized) ships from "hellhole" ports, commercial captain Hardberger proves himself tough as a tank and articulate as a poet….[he] has a seafarer's gift for atmospheric storytelling, layering details to create a sense of place, history, and foreboding…Hardberger's escapades make undeniably fun reading.”  – Publishers Weekly (starred review)