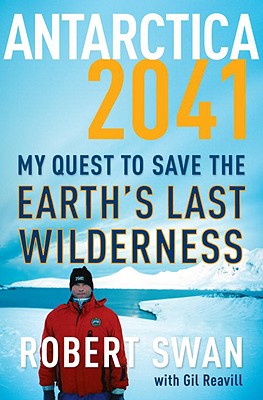 My Quest to Save the Earth's Last Wilderness

Adventurer turned environmentalist Robert Swan illuminates the perils facing the planet come 2041—the year when the international treaty protecting Antarctica is up for review—and the many steps that can be taken to avoid environmental calamity.


In 1985, when Robert Swan walked across Antarctica, the fragile polar environment was not high in his mind. But upon his return, the earth’s perilous state became personal: Robert’s ice-blue eyes were singed a pale gray, a result of being exposed to the sun’s rays passing unfiltered through the depleted ozone layer. At this moment, his commitment to preserving the environment was born, and in Antarctica 2041 Swan details his journey to awareness, and his firm belief that humans can reverse the harm done to the planet thus far, and secure its future for generations to come.

Despite the dire warnings Swan raises in Antarctica 2041—exponentially high greenhouse-gas levels; rising seas; massive species extinction—he says there is much we can do to avert looming disaster. Ultimately an upbeat call to action, his book provides the information people need to understand the world’s crisis, and the tools they need to combat it, ultimately showing us all that saving Antarctica amounts to saving ourselves.

ROBERT SWAN is the first person to have walked to both the North and South Poles. An active lecturer, he regularly leads Antarctic expeditions. He divides time between London, New York, and Antarctica.

GIL REAVILL has coauthored many books including "Tiki" by Tiki Barber and "Steve and Me" by Terri Irwin.