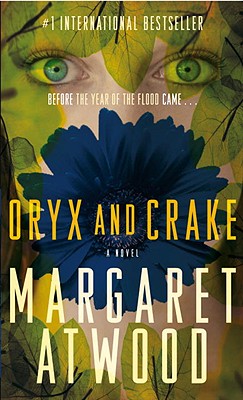 A stunning and provocative new novel by the internationally celebrated author of The Blind Assassin, winner of the Booker Prize. Margaret Atwood's new novel is so utterly compelling, so prescient, so relevant, so terrifyingly-all-too-likely-to-be-true, that readers may find their view of the world forever changed after reading it. This is Margaret Atwood at the absolute peak of her powers. For readers of Oryx and Crake, nothing will ever look the same again. The narrator of Atwood's riveting novel calls himself Snowman. When the story opens, he is sleeping in a tree, wearing an old bedsheet, mourning the loss of his beloved Oryx and his best friend Crake, and slowly starving to death. He searches for supplies in a wasteland where insects proliferate and pigoons and wolvogs ravage the pleeblands, where ordinary people once lived, and the Compounds that sheltered the extraordinary. As he tries to piece together what has taken place, the narrative shifts to decades earlier. How did everything fall apart so quickly? Why is he left with nothing but his haunting memories? Alone except for the green-eyed Children of Crake, who think of him as a kind of monster, he explores the answers to these questions in the double journey he takes - into his own past, and back to Crake's high-tech bubble-dome, where the Paradice Project unfolded and the world came to grief. With breathtaking command of her shocking material, and with her customary sharp wit and dark humour, Atwood projects us into an outlandish yet wholly believable realm populated by characters who will continue to inhabit our dreams long after the last chapter.

Praise For Oryx and Crake…

“Rigorous in its chilling insights and riveting in its fast-paced ‘what if’ dramatization, Atwood’s superb novel is as brilliantly provocative as it is profoundly engaging.” -- Booklist (starred review)

“Oryx and Crake is Atwood at her playful, allegorical best.” -- Globe and Mail

“[Oryx and Crake is written] with a style and grace that demonstrate again just how masterful a storyteller she is. If one measure of art’s power is its ability to force you to face what you would very much rather not, Oryx and Crake -- the evocative tale of a nightmarish near-future -- is an extraordinary work of art, one that reaffirms Atwood’s place at the apex of Canadian literature.” -- Maclean’s


“Atwood’s new masterpiece.…Extraordinary.… [Atwood pulls] back the curtain on her terrible vision with such tantalizing precision, its fearsome implications don’t fully reveal themselves until the final pages.… A darkly comic work of speculative fiction.” -- W Magazine (U.S.)

“For all its artistic achievement, this novel poses serious questions.… Margaret Atwood is a consummate artist, yes, but her work also pricks our social and ethical consciousness. That is a rare combination, an important achievement.…” -- Globe and Mail

“Riveting.…Chesterton once wrote of the ‘thousand romances that lie secreted in The Origin of Species.’ Atwood has extracted one of the most hair-raising of them, and one of the most brilliant.” -- Publishers Weekly

“Oryx and Crake is Atwood at her best -- dark, dry, scabrously witty, yet moving and studded with flashes of pure poetry. Her gloriously inventive brave new world is all the more chilling because of the mirror it holds up to our own. Citizens, be warned.” -- The Independent (U.K.)

“Oryx and Crake can hold its own against any of the 20th century’s most potent dystopias -- Brave New World, 1984, The Space Merchants -- with regard to both dramatic impact and fertility of invention.…Oryx and Crake showcases a nightmare version of the present era of globalization on a globe coming apart at its ecological seams.… It is a scathing (because bang-on) portrait of the way we live now.…Majestic.…” -- Washington Post

“Is there a more accomplished or versatile writer, in Canada, than Margaret Atwood?… Atwood is on top of the times -- intuits them, really.… The moral questions of Oryx and Crake are already in play.” -- National Post (profile)

“Oryx and Crake is a broad canvas that allows Atwood to show off her brilliant talent for satire and wordplay, as well as her considerable love and knowledge of the natural world.” -- Quill & Quire

“Perfectly constructed, funny, and satiric. It is inventive yet prophetic, in fact, apocalyptic and weirdly feasible.… It is brilliant.” -- Winnipeg Free Press

“Oryx and Crake is set just the other side of the evening news, in a future so close we can smell its stench.…Atwood has outdone herself here.” -- Georgia Straight

“Contemporary novelists rarely write about science or technology. Margaret Atwood tackles both -- and more -- in one of the year’s most surprising novels.” -- The Economist

Margaret Atwood was born in Ottawa in 1939, and grew up in northern Quebec and Ontario, and later in Toronto. She has lived in numerous cities in Canada, the U.S., and Europe. She is the author of more than thirty books, novels, short stories, poetry, literary criticism, social history, and books for children. Atwood's work is acclaimed internationally and has been published around the world. Her novels include The Handmaid's Tale and Cat's Eye, both shortlisted for the Booker Prize; The Robber Bride; Alias Grace, winner of the prestigious Giller Prize in Canada and the Premio Mondello in Italy, and a finalist for the Booker Prize, the Orange Prize, and the International IMPAC Dublin Literary Award; and The Blind Assassin, winner of the Booker Prize and a finalist for the International IMPAC Dublin Literary Award. Her new novel is Oryx and Crake. She is the recipient of numerous honours, such as The Sunday Times Award for Literary Excellence in the U.K., the National Arts Club Medal of Honor for Literature in the U.S., Le Chevalier dans l'Ordre des Arts et des Lettres in France, and she was the first winner of the London Literary Prize. She has received honorary degrees from universities across Canada, and one from Oxford University in England. Margaret Atwood lives in Toronto with novelist Graeme Gibson.
Loading...
or
Not Currently Available for Direct Purchase