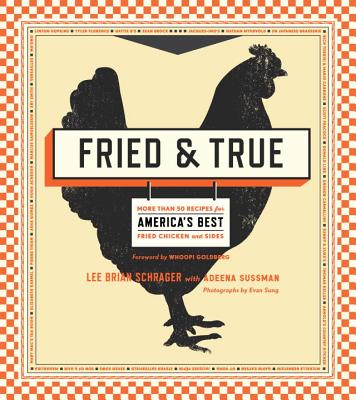 More than 50 Recipes for America's Best Fried Chicken and Sides: A Cookbook

Whether you prefer it cold out of the fridge or hot and crispy on a buttery biscuit, you will find your new favorite fried chicken recipe in Fried & True, serving up more than 50 recipes for America’s most decadently delicious food.

Lee Schrager has left no stone unturned in his quest to find America’s best fried chicken. From four-star restaurants to roadside fry shacks, you’ll learn how to brine your bird, give it a buttermilk bath, batter or even double batter it, season with loads of spices, and fry it up to golden perfection. Recipes to savor include:

Sink your teeth into Fried & True, the source of your next great fried chicken masterpiece and a tribute to America’s most beloved culinary treasure.

LEE BRIAN SCHRAGER is the founder and director of the Food Network & Cooking Channel South Beach and New York City Wine & Food Festivals. He is also the vice president of corporate communications and national events at Southern Wine & Spirits of America and the author of Fried and True and The Food Network South Beach Wine & Food Festival Cookbook. A graduate of the Culinary Institute of America, Lee has appeared on Today and Rachael Ray, and serves on the board of directors for the Food Bank of New York City. He lives in Miami and New York City.

ADEENA SUSSMAN is a cookbook writer and recipe authority. In addition to this book she also collaborated with Lee Schrager on Fried and True, and is the coauthor of many other cookbooks. Her work has also been published in Food & Wine, The Wall Street Journal, Martha Stewart Living, Every Day with Rachael Ray, and on Epicurious and Food Republic.

EVAN SUNG is a prominent food, lifestyle, and travel photographer based in Brooklyn. His work appears regularly in the New York Times and he has worked on cookbooks with some of the top chefs from around the world.
Loading...
or
Not Currently Available for Direct Purchase