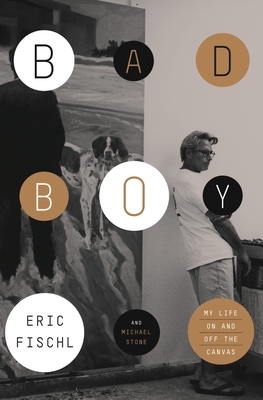 My Life On and Off the Canvas

In Bad Boy, renowned American artist Eric Fischl has written a penetrating, often searing exploration of his coming of age as an artist, and his search for a fresh narrative style in the highly charged and competitive New York art world in the 1970s and 1980s. With such notorious and controversial paintings as Bad Boy and Sleepwalker, Fischl joined the front ranks of America artists, in a high-octane downtown art scene that included Andy Warhol, David Salle, Julian Schnabel, and others. It was a world of fashion, fame, cocaine and alcohol that for a time threatened to undermine all that Fischl had achieved.

In an extraordinarily candid and revealing memoir, Fischl discusses the impact of his dysfunctional family on his art—his mother, an imaginative and tragic woman, was an alcoholic who ultimately took her own life. Following his years as a student at Cal Arts and teaching in Nova Scotia, he describes his early years in New York with the artist April Gornik, just as Wall Street money begins to encroach on the old gallery system and change the economics of the art world. Fischl rebelled against the conceptual and minimalist art that was in fashion at the time to paint compelling portraits of everyday people that captured the unspoken tensions in their lives. Still in his thirties, Eric became the subject of a major Vanity Fair interview, his canvases sold for as much as a million dollars, and The Whitney Museum mounted a major retrospective of his paintings.

Bad Boy follows Fischl’s maturation both as an artist and sculptor, and his inevitable fall from grace as a new generation of artists takes center stage, and he is forced to grapple with his legacy and place among museums and collectors. Beautifully written, and as courageously revealing as his most provocative paintings, Bad Boy takes the reader on a roller coaster ride through the passion and politics of the art world as it has rarely been seen before.

Praise For Bad Boy: My Life On and Off the Canvas…

“Fischl is entertaining company. The same obervational frankness that imbues his paintings makes this a brave and candid book. It's also, in many ways, a painful book: he's such a deft portraitist that he captures himself at his most unknowing, wounded, prideful and self-contradictory...Occasionally vain, occasionally score-settling, it's as unsparing as the aging Rembrant's blunt self-portraits.” -New York Times Book Review

"Given Fischl's aptitude for telling stories as a painter, it probably shouldn't be a surprise that Bad Boy, a memoir that covers his life from his earliest years to the present, is so engaging. The book, which takes its name from a celebrated 1981 painting of Fischl's that shows a boy facing a naked woman in a bedroom, is unusual among the writings of artists in its novelistic drive and readability...folding painful family memories into accounts of the artist's years in high school, his experiences with girlfriends and teachers, and the art scene he began encountering in New York in the late 1970s." -New York Review of Books

“At once a confessional and a manifesto…Will move readers with its tales of a fraught life in art.” -Wall Street Journal

"A clear-eyed account of the art world’s profound transformations over the past 30 or so years, told by an artist whose career perfectly maps that period." -The New York Observer

"...will probably stand as one of the more revealing documents about the late 20th-century art world.” -ARTnews

"An in depth look at the life of America's foremost narrative painter Eric Fischl." -Hamptons.com

"[Fischl] pulls no punches in depicting his experiences as a gritty bohemian and upscale urbanite...Equally absorbing as an insider's chronicle of the late twentieth-century art world's booms and busts." -Booklist

"A brave and beautiful book about the difficulties of practicing as a painter in America, and a reminder of how essential the courage of the pursuit of a personal vision is to art."
–Adam Gopnik, staff writer, the New Yorker, author of Paris to the Moon

“Erich Fischl’s Bad Boy is powerful and important: emotionally incisive, brilliantly well-crafted, and completely authentic.  In short, it is just like his art.”
–Steven Naifeh and Gregory White Smith, Pulitzer Prize-winning authors of Jackson Pollock and Van Gogh: The Life

“Soo good, so incredibly honest, vulnerable, real, moving, compassionate; an incredible document of a man's life, an artist’s development and a particular moment in time…the best artist-memoir I've ever read.”
–A.M. Homes, author of The End of Alice and May We Be Forgiven

"Only an artist of Eric Fisch's intellect, resilience and wit could have survived his dreadful childhood, conquered a nearly fatal addiction to booze and cocaine, salvaged his marriage to the marvelous painter April Gornik, and written this compulsively riveting book."
–Francine du Plessix Gray, Pulitzer Prize-nominated writer and literary critic

“As Eric relates across this absorbing chronicle, the ongoing quest for authenticity amidst the thralls of dysfunction would come to constitute one of his primary themes…And as in his art, so here in his writing, he does so with vivid, striking and memorable dispatch.”
–Lawrence Weschler, Seeing is Forgetting the Name of the Thing One Sees and Uncanny Valley: Adventures in the Narrative

Eric Fischl is America’s foremost narrative painter; his paintings hang in the Metropolitan Museum of Art, the Whitney Museum of American Art, the Museum of Modern Art, and in collections throughout the world. He lives with his wife, the acclaimed landscape artist April Gornik, in Sag Harbor on Long Island.
Loading...
or
Not Currently Available for Direct Purchase