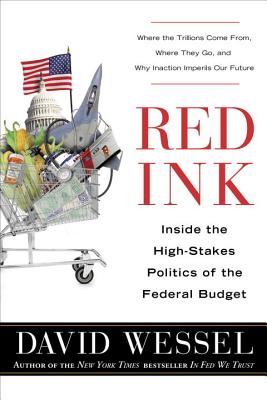 Inside the High-Stakes Politics of the Federal Budget

David Wessel, the Pulitzer-Prize-winning reporter, columnist, and bestselling author of In Fed We Trust, dissects the federal budget: a topic that is fiercely debated today in the halls of Congress and the media, and yet is misunderstood by the American public.


In a sweeping narrative about the people and the politics behind the budget, Wessel looks at the 2011 fiscal year (which ended September 30) to see where all the money was actually spent, and why the budget process has grown wildly out of control. Through the eyes of key people--Jacob Lew, White House director of the Office of Management and Budget; Douglas Elmendorf, director of the Congressional Budget Office; Blackstone founder and former Commerce Secretary Pete Peterson; and more--Wessel gives readers an inside look at the making of our unsustainable budget.


Praise For Red Ink: Inside the High-Stakes Politics of the Federal Budget…


“Should be a first port of call for American voters sadly misinformed about their federal budget…Wessel’s aim is to explain for a general audience the basics of the budget – where the money comes from and goes to – and to make the explanation interesting. He succeeds.” –Financial Times

“Wessel…has an insider’s grasp of the players, issues and argot surrounding the budget. Yet he writes with an outsider’s eye, distilling his tale of the fiscal monster into about 150 pages of simple prose and a smattering of charts.” –Businessweek

“This is the most useful book on government spending since the publication of the classic work, The Debt and Deficit by Robert Heilbroner and Peter Bernstein. In the service of economic literacy, I wish that a few members of the House and the Senate would read the entire book aloud on the floor of the respective chambers (but don't hold your breath).” –Huffington Post

“The federal budget is an inherently complex subject that could easily become boring. But Wessel staves off yawns by painting miniature portraits of lovable wonks from across the spectrum…He gets right to the core of the problem: Big-ticket programs that much of the public loves but few want to pay for.” –Reason

“An extraordinarily useful book…For people unfamiliar with the ins and outs of the federal budget, it should be required reading. For those who already know their way around government finances, it is still a handy resource, but at the same time deeply depressing.” –Salon

“[Wessel] is blessed with the ability to make the obscure and arcane comprehensible.” –Canada Free Press

"Packed with facts and figures--not normally the sort of material that makes for riveting story-telling. Yet the plot of Red Ink is fascinating and frightening." –Daytona Beach News-Journal

“When laid out in front of us in the clam and talented hand of Wessel, we begin to understand in more detail exactly what we’re deciding on, and that while it’s not going to be easy, fixing the deficit is entirely doable... If you’re interested that dialogue and in further education instead of soundbites and the pontification of pundits this election season, then this is certainly a book for you.” –800 CEO Read

"A highly informative volume designed to give voters a grip on what exactly is at stake...Wessel doesn't tell you how to think, but he does give you the facts to think more clearly about what needs to be done." —Kirkus Reviews

"The inner workings of the federal budget and where the money goes by economics expert David Wessel...Controversy over whether tax increases of spending cuts should be made to defense, Medicare, or Social Security spending provides fuel for great debate." —Booklist

“The federal budget deficit is among the country’s most discussed but least understood policy issues. If only everyone would read David Wessel’s Red Ink.”
—Alan S. Blinder, professor of Economics and Public Affairs at Princeton University, former vice chairman, Federal Reserve Board

“Red Ink is the most concise, understandable, and focused book I have read about the dire problems we now face because of our burgeoning deficits and debt. It is not a pretty tale, but it is a tale all informed citizens should know.” —David M. Rubenstein, co-chief executive officer, The Carlyle Group

“Stop. Buy this book, or at least read the first chapter. David Wessel explains the approaching debt crisis in clear, concise, nonpartisan plain English. It will not only scare your pants off, it will motivate you to call your congressman and scream, ‘For God’s sake, enough partisanship, save America, cut spending, raise revenue, whatever! But do it and do it now.’” —Erskine Bowles, former chief of staff for Bill Clinton and co-chairman of Barack Obama’s National Commission on Fiscal Responsibility

“In Red Ink David Wessel has accomplished two miracles: he has made a budget book interesting and he has deciphered the behavior of Washington for Americans beyond the Beltway. Nicely done.” —Douglas Holtz-Eakin, former director of the Congressional Budget Office

“David Wessel’s Red Ink is a wise and pithy introduction to the great economic issue of our time.” —N. Gregory Mankiw, professor of Economics, Harvard University

“I wish every voter would read this book. It spells out in a clear, non-partisan way the realities of the deficit, how we got here, and the hard choices that lie ahead. The message is painful, but the book is not -- it is engaging, thoughtful, and a pleasure to read.” —Christina D. Romer, former Chair of the Council of Economic Advisers and current professor of Economics at the University of California, Berkeley

“David Wessel does a first rate job at providing insight into complex fiscal issues. Anyone wanting to understand key players, pivotal moments, and high stakes in the critical issue of America's long-term unsustainable debts would be very well served by Red Ink.” —Peter G. Peterson, former U.S. Secretary of Commerce, founder of the Peter G. Peterson Foundation, and author of the bestseller, Running on Empty

DAVID WESSEL is economics editor of "The Wall Street Journal "and writes "The Capital" column, a weekly look at forces shaping living standards around the world. Wessel joined "The Wall Street Journal" in 1983 after working at the "Hartford Courant" and the "Boston Globe." He is a frequent guest on NPR's Morning Edition and has shared two Pulitzer Prizes. He and his wife live in Washington, D.C.