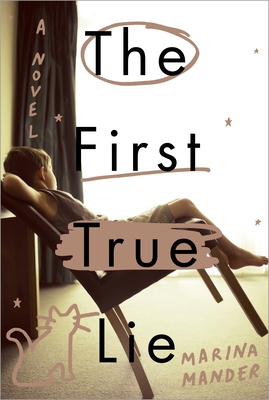 An utterly compelling, heartbreaking novel that introduces a revelatory young voice to the U.S. market.

Meet Luca, a curious young boy living with his mother, a taciturn woman who every now and then tries out a new father. Luca keeps to himself, his cat, Blue, and his favorite toys—words. One February morning his mom doesn't wake up to bring him to school, so Luca—driven by a deep fear of being an orphan—decides to pretend to the world that his mom is still alive. At first it's easy. Luca dresses himself for school, makes sure Blue gets his dinner, and manages to avoid nosy neighbors. He and Blue camp out in the living room and embark on imaginary expeditions to outer space, and Luca dreams about marrying his school crush, Antonella. Soon, however, the laundry starts piling up, the fridge emptying—and the smell of Mama's decaying body begins to permate the apartment.

As Luca grapples with what to do, we ultimately witness something much more poignant than the morbid circumstance—a young boy's journey to the point at which he can say: “I am no longer an orphan. I am a single human being. It's a matter of words.”

Praise For The First True Lie: A Novel…

“From page one I was with Luca, the adorable and witty young narrator of this brilliant and emotionally upsetting story. I lived in his words and in his head, and stayed there for a long time after I had finished the book.” —Herman Koch, author of the international bestseller The Dinner

“Mander’s English-language debut is narrated by the ebullient Luca, whose voice is every bit as engaging as the best child narrators out there: imagine a blend of Oskar (Extremely Loud and Incredibly Close), Blue (Special Topics in Calamity Physics), and Christopher Boone (The Curious Incident of the Dog in the Night-Time). This slim novel smartly focuses on the cranks and gears of Luca’s imagination….[A]t its best, Luca’s original voice will break your heart. Ultimately, Luca’s story offers a buoyant picture of hope in the face of disaster, and life in the face of death.” —Publishers Weekly

"Translated from the Italian in clear, lyrical prose, always true to the child’s viewpoint, the blend of horror and innocence captures a universal nightmare….The terse survival drama of the child marooned alone, not in the wilderness but in the crowded city, will stir readers: Could it be happening on my street? How will it end?” —Booklist

“[An] elegantly carved look into the inner life of an orphaned child.” —Kirkus Reviews

“Cruel, heart-wrenching, and surprising...As all great books do, this opens a window into a world. It will not be easy for you to close that window, nor to forget that world.” —La Republica

“A beautiful novel that tells a terrible story with brio and depth.” —Tiziano Scarpa

MARINA MANDER is the author of Manuale di Ipocondria Fantastica (A Fantastical Manual of Hypochondria, 2000), Catalogo degli Addii (A Catalogue of Goodbyes, 2010) and Nessundorma, 2013. This is her first U.S. publication. She lives in Milan and works in publishing.
Loading...
or
Not Currently Available for Direct Purchase