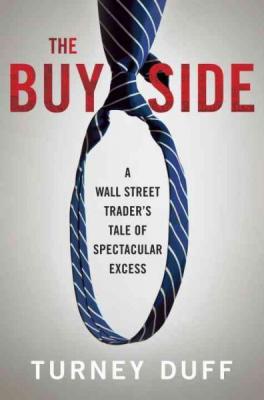 The Buy Side (Hardcover)

The Buy Side, by former Galleon Group trader Turney Duff, portrays an after-hours Wall Street culture where drugs and sex are rampant and billions in trading commissions flow to those who dangle the most enticements.  A remarkable writing debut, filled with indelible moments, The Buy Side shows as no book ever has the rewards – and dizzying temptations – of making a living on the Street.

Growing up in the 1980’s Turney Duff was your average kid from Kennebunk, Maine, eager to expand his horizons. After trying – and failing – to land a job as a journalist, he secured a trainee position at Morgan Stanley and got his first feel for the pecking order that exists in the trading pits.  Those on the “buy side,” the traders who make large bets on whether a stock will rise or fall, are the “alphas” and those on the “sell side,” the brokers who handle their business, are eager to please.

How eager to please was brought home stunningly to Turney in 1999 when he arrived at the Galleon Group, a colossal hedge-fund management firm run by secretive founder Raj Rajaratnam.  Finally in a position to trade on his own, Turney was encouraged to socialize with the sell side and siphon from his new broker friends as much information as possible.  Soon he was not just vacuuming up valuable tips but also being lured into a variety of hedonistic pursuits.  Naïve enough to believe he could keep up the lifestyle without paying a price, he managed to keep an eye on his buy-and-sell charts and, meanwhile, pondered the strange goings on at Galleon, where tens of millions were being made each week in sometimes mysterious ways.

At his next positions, at Argus Partners and J.L. Berkowitz, Turney climbed to even higher heights – and, as it turned out, plummeted to even lower depths – as, by day, he solidified his reputation one of the Street’s most powerful healthcare traders, and by night, he blazed a path through the city’s nightclubs, showing off his social genius and voraciously inhaling any drug that would fill the void he felt inside.

A mesmerizingly immersive journey through Wall Street’s first millennial decade, and a poignant self portrait by a young man who surely would have destroyed himself were it not for his decision to walk away from a seven-figure annual income, The Buy Side is one of the best coming-of-age-on-the-Street books ever written.

Turney Duff has worked on Wall Street since 1994, including at Morgan Stanley, the Galleon Group, Argus Partners, and J.L. Berkowitz. A graduate of Ohio University E.W. Scripps School of Journalism, he has written and executive-produced two short movies and under his rap name "Cleveland D," was partly responsible for the infamous Galleon song, "On the Good Ship Galleon." He currently lives in Long Island City.

Praise For The Buy Side: A Wall Street Trader's Tale of Spectacular Excess…

“A heavyweight confessional about the perils of a life spent chasing the almighty dollar…even though the author’s brutal honesty about his increasingly chaotic personal life is commendable, it’s really more his vivid portrait of the everyday inner workings of life at a hedge fund that fascinates…A fast-paced memoir of the easy-money hypercapitalist dream-turned- nightmare.”
--Kirkus Reviews

“Looking for a Hollywood-worthy account of Wall Street with lots of juicy details about the high life? Duff, a former financial trader who climbed the ranks at several major firms, provides a fascinating glimpse into the trader’s life as he narrates his journey from smalltown boyhood in Kennebunk, Maine, to hitting the jackpot in Manhattan, to succumbing to the poisons of success…[This] fast-paced tale will absorb readers…a wild ride.”
--Publishers Weekly

“This is why I keep my money safe and sound under the mattress. You could get high just reading this book. Mamas, don't let your babies grow up to be Wall Street traders."
--James Patterson, #1 New York Times bestselling author of Along Came a Spider and Kiss the Girls

“Turney Duff is a natural storyteller, and his tale of how a naive kid from Maine traded in L.L. Bean for Armani and got sucked into the seamy side of Wall Street is almost impossible to put down. The book is by turns hilarious, harrowing, maddening, and illuminating. After this debut, the smart money will be on Duff.”
--Bethany McLean, New York Times bestselling author of The Smartest Guys in the Room and All the Devils Are Here

“Turney Duff’s The Buy Side picks up where the Academy Award-winning film about systemic corruption on Wall Street, 'Inside Job', leaves off.  Duff, who at one time was the promising rookie on the trading desk at troubled hedge fund Galleon, gives us a front-row seat to the Street’s dark side – but the tale also features a personal story that will have you cheering as Duff fights his way through a jungle of excess and figures out what really matters. To all those who want to rule the market not just during business hours but after hours, beware -- you may not have Duff’s survival skills.”
--Lawrence G. McDonald, New York Times bestselling author of A Colossal Failure of Common Sense

“The Buy Side takes the reader on an extremely wild ride so eloquently and honestly that we never want it to end.  Cocaine wants everything you love and everything that loves you.  Turney Duff had everything and nothing while trading billions of dollars on a razor's edge. His book takes you from Wall Street to Skid Row to the Thompson Hotel – and then, mercifully, back to sanity and finding a place in the world. Hang on, The Buy Side is gonna move you around, and there are no seatbelts to keep you from getting hit hard.”
--Brian O’Dea, author of High: Confessions of an International Drug Smuggler

“The Buy Side is ‘Wall Street’ meets ‘Breaking Bad’ – except that this book is fact not fiction. Turney Duff yields to temptation at every turn, and the sheer volume of criminal behavior he saw, and even participated in, is astonishing…If you want to see Wall Street’s seamy underbelly firsthand, read this book.”
--Frank Partnoy, bestselling author of F.I.A.S.C.O and Infectious Greed

"If you took Gordon Gekko, Bud Fox, a copy of Bright Lights, Big City, and threw them in a blender with an ounce of cocaine, a bottle of Patron Tequila, and your favorite teddy bear you'd have yourself a Buy Side smoothie. Turney's my kind of guy; a madman with heart.  I couldn't put the book down."
--Colin Broderick, author of Orangutan

“Does Wall Street make people crazy or are crazy people simply attracted to Wall Street?  The Buy Side doesn’t get us any closer to answering that question, but along the way we get a look inside perhaps the most ethically-challenged investment firm in recent memory, and a harrowing journey through drug addiction and recovery.  This is not a musical comedy; at the end, you’re just relieved that Duff is alive.”
--Jared Dillian, author of Street Freak: Money and Madness at Lehman Brothers

“Turney Duff's The Buy Side is the perfect parable for Wall Street's lost decade. Duff’s account of his rise and fall has it all, from a fast-paced coke-crazed trip through Manhattan nightlife that conjures Bright Lights, Big City, to an eyewitness account of insider trading and front running that reads like a federal indictment. Broke but not broken, Duff ends up better than others on Wall Street have--sober, chastened, and lucky to be alive after the self-destructive excesses of easy money and empty ambition.”
-Guy Lawson, New York Times bestselling author of Octopus