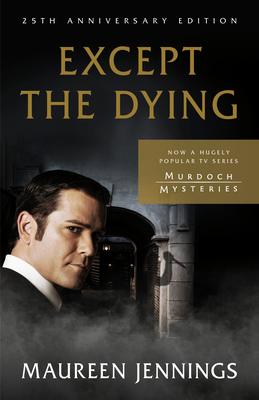 In the cold Toronto winter of 1895, the unclad body of a young woman is found naked and frozen in a quiet laneway. Acting Detective William Murdoch, driven by pity for the girl and the desire to secure his promotion, is determined to pursue every lead and reveal the truth. Although influential people pressure the police to solve the mystery quickly, when the girl is eventually identified, it becomes clear that those connected with her life have secrets to hide.

Murdoch must use every detective skill he possesses as well as his understanding of human nature as he pursues the mystery through both brothels and drawing rooms, desperate to untangle the case before more lives are lost.

Praise For Except the Dying: 25th Anniversary Edition…

Shortlisted for an Arthur Ellis Award

"No author has mined Toronto's past with the dedication to detail of mystery writer Maureen Jennings."
– Toronto Star

"A first novel enriched by the vividness of its period settings and animated by the lifelike characters caught up in its broad social sweep."
– New York Times

Maureen Jennings’s Detective Murdoch series has been a hit from the start. Published to rave reviews, the first novel, Except the Dying, was shortlisted for both the Arthur Ellis and the Anthony first novel awards. The influential Drood Review picked Poor Tom Is Cold as one of its favourite mysteries of 2001. And Let Loose the Dogs was shortlisted for the 2004 Anthony Award for best historical mystery. Three novels have been adapted for television with two more in development.

Born in the U.K., Jennings now lives in Toronto.
Loading...
or support indie stores by buying on