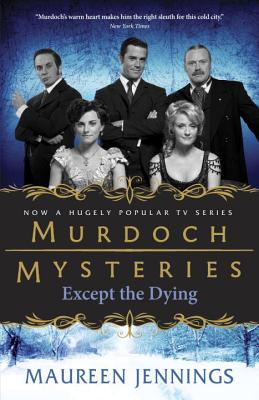 Except the Dying (Murdoch Mysteries #1)

In the cold Toronto winter of 1895, the unclad body of a servant girl is found frozen in a deserted laneway. The young victim was pregnant when she died. Was her death an attempt to cover up a scandal in one of the city's influential families? Detective William Murdoch quickly finds out that more than one person connected with the girl's simple life has something to hide.


Praise For Except the Dying (Murdoch Mysteries #1)…

"A first novel enriched by the vividness of its period settings and animated by the lifelike characters caught up in its broad social sweep." - New York Times

MAUREEN JENNINGS's first novel in the Detective Murdoch series, Except the Dying, was published to rave reviews and shortlisted for both the Arthur Ellis and the Anthony first novel awards. The influential Drood Review picked Poor Tom Is Cold as one of its favourite mysteries of 2001. Let Loose the Dogs was shortlisted for the 2004 Anthony Award for best historical mystery. Night's Child was shortlisted for the Arthur Ellis Award, the Bruce Alexander Historical Mystery Award, the Barry Award, and the Macavity Historical Mystery Award. And A Journeyman to Grief was nominated for the Arthur Ellis Award. Three of the Detective Murdoch novels have been adapted for television, and a Granada International television series, The Murdoch Mysteries, based on the characters from the novels, is entering its third season on CityTV and UKTV.
Loading...
or support indie stores by buying on